The Yellow Jacket is an iPhone case that adds a stun gun to the iPhone, giving users something to protect themselves with that’s theoretically always at hand.

The stun gun in the case is capable of taking down an adult male according to the team’s website, which is enough to ward many potential threats.

The Yellow Jacket connects to the 30-pin Dock Connector on the bottom of the iPhone 4/4S, and can provide an additional 20 hours of battery life to the phone. That same battery powers the stun gun included in the case, so users probably won’t want to use the battery too much, just in case.

The stun gun and battery do seem to add a lot of bulk to the iPhone 4/4S, but for many the bulk is likely not an issue given the function of the case.

Yellow Jacket successfully reached its funding goal of $100,000 on Indiegogo last July, and is now available for pre-order through the company’s website. While the original promo claimed the device would cost $125, the pre-order price is currently set at $139.99. 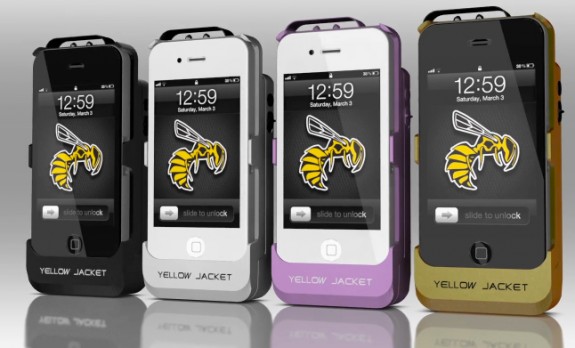 Those who backed the device on Indiegogo already have the case, or should receive it soon, so those who are skeptical about crowd-funded project can rest assured that it’s real.

While the Yellow Jacket is only available for the iPhone 4/4S at the moment, the team plans to bring the case to more recent phones. The team’s website claims the case will come to the iPhone 5 and Samsung Galaxy S3 sometime in the first quarter of 2013. That gives the team the rest of March to announce those versions of the case.

The sign-up page for future cases also lists the “HTC Evo,” though it’s not clear which EVO model the team has in mind for the case.