Users looking for an iPhone trade-in deal should look no further than a new trade in bonus deal at NextWorth that bumps the trade in value for any iOS device up by 20%.

Even though Apple didn’t announce the iPhone 5S at their event this week, many users are still looking for a new iPhone or to switch to something with a larger screen like the Samsung Galaxy S4 or HTC One.

With this deal, users can score almost $100 more for a used iPhone or iPad, and the deal even works for a broken device that won’t turn on.

Users who enter the code BONUS20 will get a 20% bonus on top of the trade in value, which adds $70 to the price of a functioning iPhone and similar increases on other Apple devices. NextWorth even pays $100 for a broken iPad 2 that won’t turn on and has a broken display with this bonus.

Here are iPhone trade in values, with the 20% bonus for recent devices. These are for the 16GB model on AT&T. Other models will offer higher or lower prices. 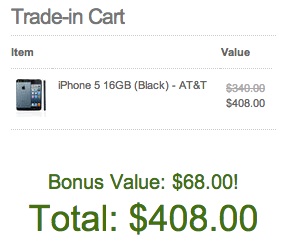 Score an iPhone trade in bonus of 20%.

NextWorth also offers the bonus on the iPod and iPad trade in values, which results in good deals for users looking to upgrade. The values below are for the 16GB WiFi only model, with the bonus, other devices will be higher.

For some of the iPad models, selling locally will likely net a much higher value, especially for new devices like the iPad mini, iPad 4 and iPad 3, but if the device is broken there may be deals to find.

Users who lock in a trade in price have 21 days to send the iPhone or iPad to NextWorth, which means you can lock in a price and make sure you like the new phone before parting with the old iPhone.

We expect iPhone and iPad trade in values will hold steady for another month or two before speculation of new models starts to push the value down. The biggest drops won’t come until we are just on the edge of an Apple announcement.

Apple could announce the iPhone 5S in September with a release that month or in October alongside iOS 7. Even with a 20% bonus, iPhone users looking to upgrade should consider waiting for the new iPhone as it will likely include a unique feature and will definitely see support for longer than current iPhone models.