On Saturday it will be illegal for consumers to unlock their iPhone to use on another carrier without going through official carrier channels.

The change to the Digital Millenium Copyright Act, commonly known as the DMCA, was made back in October, but allowed a 90 day window for consumers to buy and unlock their iPhone or other smartphone without involving their carrier.

On Saturday January 26th, the law changes, making it illegal to unlock your iPhone or other smartphone without carrier approval. This change is not beneficial to most consumers, but it doesn’t look like the law will prevent users from using an unlock service to free their iPhone from a carrier’s grip.

The primary reason to unlock an iPhone is to use it on another carrier. This is handy for users who travel to a foreign country and want to use a local cellular provider without buying a new phone. With an unlocked iPhone it’s possible to put a SIM from a local carrier in and avoid high charges from the U.S. carrier. Right now the only way to get a T-Mobile iPhone 5 is with an unlocked iPhone 5.

Consumers shouldn’t confuse the iPhone 5 unlock with an iPhone 5 jailbreak, which will still be legal after Saturday, even though an iOS 6 jailbreak for the iPad 4 won’t be legal.

Not the End of iPhone Unlocking

Despite the legal change, it doesn’t look like the DMCA will put an end to iPhone unlocking for users who are willing to go against the DMCA. 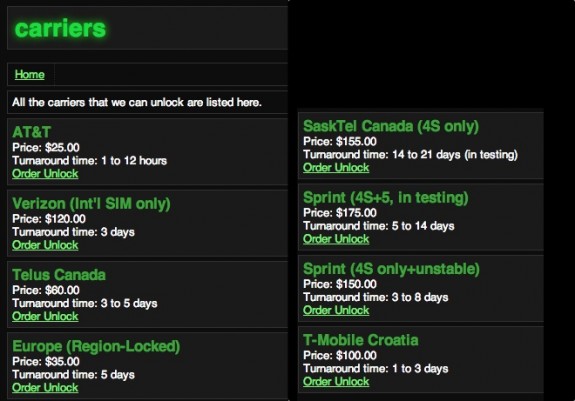 iPhone unlocking wont stop because of the DMCA.

Chronic Unlocks offers iPhone 5 unlocks as well as unlocking of any iPhone model running any iOS version. The company is in the process of launching a web portal to unlock iPhones, and currently offers iPhone unlocks via email.

In a Tweet this morning Will Strafach, aka @chronic, said that his service should continue working.

@josh_smith I don’t believe so!

The Verizon iPhone 5 is already unlocked, so users should not need to pay for an unlock in most cases. Apple also sells an unlocked iPhone 5 direct to consumers, but many users may be turned off by the $649 starting price.

The Nexus 4 is a new flagship smartphone from Google that is sold unlocked starting at $300, which offers a more attractive price for consumers.

AT&T will unlock an iPhone that users buy from AT&T under certain conditions, but this option is not enough for every user.