Ever since Apple announced the 6th generation iPod nano people have been creating wristwatch bands for it thanks to an offhand comment by Steve Jobs. The bands themselves range from inexpensive and nostalgic to worthy of the finest timepieces.

One such example of the latter is the iPocketWatch. This product doesn’t exist outside of prototypes yet, but it could soon if the creator gets enough funding. Edwin Conan took to Pozible.com to crowdfund the development and first run of the product. He’s looking for $6,000 total.

The iPW takes inspiration from the Roman numeral watch face on the nano and a hint of yearning for the old school. As he says on the page: “The last time I saw a person wearing [a pocket watch], I was in a cinema, and that person was in the film. Why isn’t there anyone wearing pocket watches anymore?” 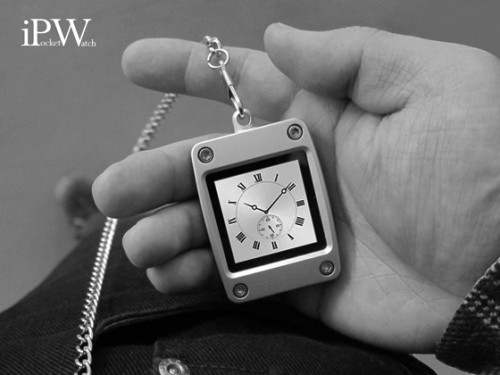 This concept also makes much more sense to me than a wristwatch version. I hate having stuff on my wrist, but I’ll gladly stick a timepiece in my pocket, especially if it’s small.

An included chain connects the iPW to a belt or belt loop. The iPW’s design also leaves the clip in back accessible so you can hook it to your pocket and show off your fancy new watch. The buttons and headphone jack are also uncovered.

The case itself is made from aluminum and comes in two variations: a square face one that allows access to the entire touchscreen and a round face one that frames the clock faces more like a watch. Though part of the touchscreen is inaccessible here, Conan says that users can still swipe and change tracks even in this smaller window. 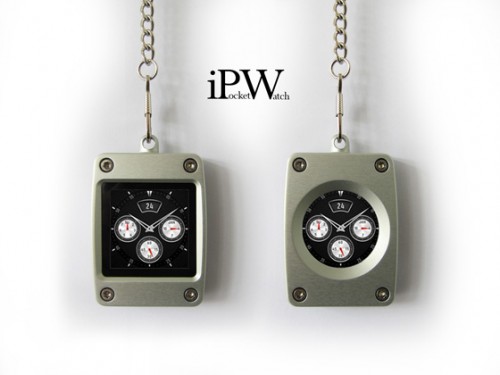 The silver color you see is standard, but a black version is available for a special price.

To help this product become a reality head over to the Pozible.com iPW page. There you can done as little as a dollar if you just want to help the creator toward his goal. If you want an iPocketWatch in return, there are donation levels starting at $40 on up to $100 with special incentives attached to each. The final product will sell for $59.99, so you can get it for less than retail if you help him out by donating now. 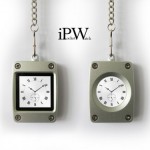 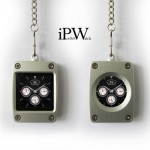 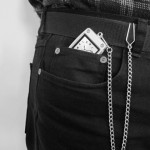