Apple didn’t announce any new iPods today, but that doesn’t mean they’re killing them off. The Cupertino-based company quietly added a new color choice today for the iPod Touch, iPod Nano and iPod Shuffle. Those interested in getting a new iPod will now have the option of selecting “Space Gray” as a color, which is darker gray that almost looks like a lighter shade of black.

The new color was launched to match the new Space Gray color on the iPhone 5s, which was announced earlier today. The Space Gray replaces the black color in the list of color choices for iPods, so if you were wanting that sleek and stealthy look for your new iPod, this is the next best thing. However, the new color isn’t available on the 16GB model of the iPod Touch; that model only comes in silver as it always has. 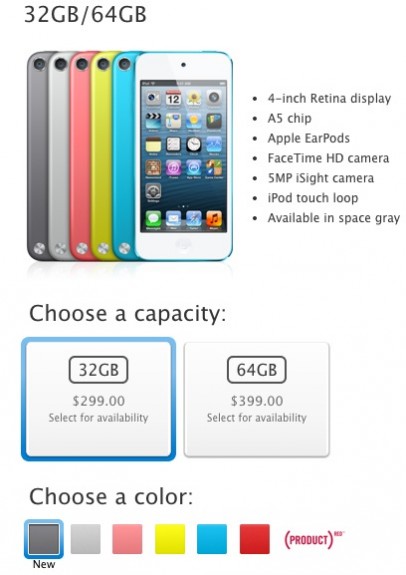 This seems to be the only change to the iPod lineup that we’re noticing so far; no pricing changes have been made, so the iPod Touch still starts at $229, while the iPod Nano starts at $149, and the Shuffle starting at $49.

Furthermore, the new color option looks to be Apple’s “refresh” for the iPod lineup this year, so it looks like we won’t see anything new from Apple as far as iPods go. Of course, there’s always the chance we’ll see upgraded iPods, but the likelihood of that happening seems to have gone down dramatically.

We’re not exactly when we’ll see an iPod upgrade next; rumors haven’t exactly been flying around lately regarding the iPod lineup. iPod sales have been declining rapidly, and Apple doesn’t talk about them a lot, which hints to the possibility that they’re becoming the elephant in the room that the company might kill off sooner or later, as the iPhone is becoming the new iPod.

As for what Apple announced today, they unveiled the new iPhone 5s and iPhone 5c, the former of which is the company’s new flagship device that comes with a new A7 processor and a nifty fingerprint scanner in the Home button. The iPhone 5c is the iPhone 5 replacement, but instead of sporting metal, it comes with a colorful new plastic casing that looks to cater towards the fun crowd. Both phones will be available starting on September 20, with the iPhone 5s starting at $199 and the iPhone 5c at $99.