I love Yanko Designs concept designs of cool products that could be. Today they showed off a dream product called the Magic MacBook Pro with iRemote.

Designer Enrico Penello dreamed up the cool idea for a MacBook Pro with a palm rest and trackpad that you can slide off to expose a small touch panel remote control, called the iRemote. The iRemote would be used to control an Apple TV interface on the MacBook Pro giving you lean back media control for watching video, listening to music and viewing slideshows.

The idea will forever live in the mind of the designer, meaning I am confident Apple won’t add the iRemote to future MacBooko Pro designs. But that doesn’t mean Apple shouldn’t take inspiration from this concept.

See the concept video below:

Why doesn’t Apple have a good remote control app for the iPhone, iPod Touch or iPad that controls your Apple TV and Mac?

They already have one for Apple TV, but it’s pretty limited and can’t do all that I’d like to see it do nor does it control your Mac. You can use iOS devices to log into your Mac using something like GoToMyPC or LogMeIn, but Apple should make an app with all the great Apple design sensibility that we enjoy from their other products.

I want an app that lets me navigate around my Apple TV and enter text into search fields and user name/password boxes with the Apple TV interface shown on my iPad so I can tap on the menus and items instead of scrolling.

When you use it to interact with a Mac, it should have a little Dock at the bottom with an on-screen keyboard that pops up when you want to enter text with it. For Safari it would have all your bookmarks so you can get one-tap access to your favorite websites.

You can find such apps if you don’t mind jail breaking your Apple TV and iOS device. I haven’t had good luck doing so. I’d rather just run stock iOS and enjoy a great remote control app. 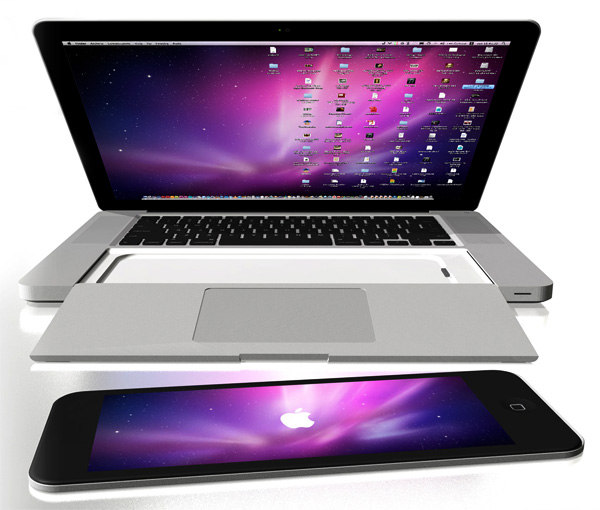 If Apple did make something like the Magic MacBook Pro, I’d rather the slide off trackpad and wrist rest become the remote. You could use the trackpad for multi-touch gesturing and have a small keyboard on the reverse side for typing from afar. If the iRemote controlled all Apple products, it would be a great lean back remote for a Mac Mini connected to your HDTV so you can enjoy flash sites like Hulu and network TV video streaming. You could also use it as a separate keyboard for iPad data entry.

While I know the iRemote will never happen as designed by Penello for Yank Designs, I hope Apple will release a new version of the Remote app with all the functionality I want.