We haven’t seen the iPhone 5 yet, but Apple is reportedly working on a new iOS device with a curved glass screen. The reports claim that this could be a new iPhone or a new iPad, but this isn’t a feature we expect to see on the iPhone 5, which we expect to be announced on October 4th.

This rumor comes via DigiTimes, which is the source of several iPhone 5 display rumors.

We had heard back in May that Apple was planning on incorporating a curved glass display in the iPhone 5, which is unlikely at this point. DigiTimes was also the source of a report that the iPhone 5 may face delays and production issues due to display manufacturing defects.

This time around, we are hearing that Apple is helping display suppliers purchase the equipment they need to make curved glass displays. The source claims that these devices will be made available for early 2012, sharing the following statement,

Suppliers of the non-Apple camp are working on products with curved cover glass in attempts to gain a competitive edge in the handheld device market dominated by Apple, sources in the glass industry said. 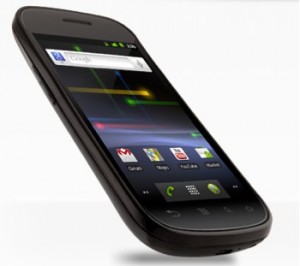 The Nexus S has a curved display.

We have already seen devices with curved glass displays, such as the Nexus S. The curved glass allows for a more natural feel while calling with the phone next to your face and helps prevent screen scratches when placed facedown.

The iPhone 4 uses Corning Gorilla Glass to keep the iPhone display protected, Corning has shown off the ability to use curved Gorilla Glass at Computex 2011.

While this rumor isn’t as fresh as most, it is an interesting one. We’ll be watching to see if Apple goes with a curved display on the iPhone 6 or on the iPad 3.