People are noticing that their uploads on AT&T, “the nation’s fastest 3G network,” are considerably slower today compared to last week with some claiming a drop from 1Mbps to 100kbps – a 90% hit! I am stunned – stunned, I say – that some people actually saw 1Mbps uploads on a regular basis. Welcome to my world, people.

First report I saw was over at GigaOM, where they relayed the 90% upload drop from a reader. Other readers are contributing their results as well. Gizmodo has additional comments rolling in, while MacRumors is compiling a list of affected areas. Most of the testing is being done via the Speedtest app on iPhones, but a few Android users have reported in, supporting the theory there is a network problem.

Several weeks back, I complained that AT&T’s Wi-Fi hotspots are only slightly faster than their 3G service. I did a follow up in Leesburg on Sunday and found even more sluggish speeds all around. There were several more people using the hotspot on this occasion but still a poor showing. My 3G performance from the same spot was considerably worse. I’ve been conducting periodic speed tests today and can honestly report I do not seem to be affected. Unfortunately, that’s probably because my upload speeds are already pretty low, maxing out in the 200kbps range. By contrast, my download speeds typically fluctuate between 1Mbps and 3Mbps, at times exceeding what I get at AT&T hotspots. 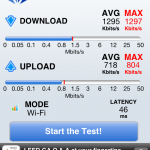 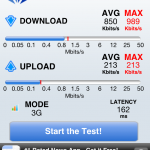 3G from Starbucks in Leesburg, VA 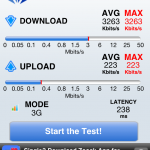 So while I can’t back up the complaints that AT&T is slowing down uploads, it’s only because I don’t see the big speeds that others have. BTW, these 640×960 screenshots from my iPhone 4 PC look insanely big on my PC display.