Microsoft Office for iPad has been long rumored, and today at an Office event in San Francisco we just might learn more about how Microsoft plans to bring the next version of office to the iPad, Android and of course Surface tablets.

The next version of Microsoft Office, called Office 15, is rumored to arrive this fall and bring several new features in tow.

USA Today reports that Office for iPad and Adobe PDF editing might be built-in to Office 15.

Office for iPad first leaked in February, but Microsoft denied the existence of the app. Rumors again surfaced in May, pointing to a November 10th release date. 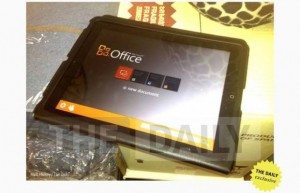 Leaked photo of Office for iPad.

With Surface tablets arriving this fall and in early 2013, Microsoft might want to keep Office confined to these new tablets in order to push Surface in the enterprise, but that may be short-sighted.

Apple sold 11.8 million iPads last quarter and 15.4 million iPads in Q1 2012, marking just a portion of the millions of iPads in use. On the other hand, there are no Surface tablets in use yet.