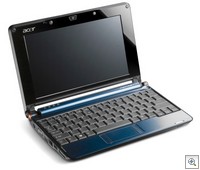 Good friend Kevin Tofel is offering a good hypothesis in his thinking about the land of NetBooks (or whatever you want to call them.) Simply put Kevin thinks that the hoops a typical out-of-the-box user has to jump through to install additional applications other than what is included by the OEM might be a big differentiator when it comes to sorting out which NetBook(s) might become popular with users. I think he’s right.

I haven’t had as much hands on time with the Acer Aspire One as Kevin has. My wife won’t let it go and our schedules are at cross purposes these days as we have two shows running in two different theatres. But, Kevin’s point is a real one for users such as my wife. While she can unbox the device, get connected and create some documents, what happens when she (or any other user) wants to add an application to the device?

I’m guessing this is going to be a boon for Microsoft once general knowledge of this starts getting around as folks will opt for the more familiar XP options. I’m also guessing that perhaps this might be some hidden subtext in Intel’s Paul Otellini’s recent comments that ““you’re dealing with something that most of us wouldn’t want to use.Ã¢â‚¬Â

Here is one possible way I can see this playing out. Not only could this situation be a differentiator between different NetBooks, but it could become a key differentiator between NetBooks and the more traditional Notebook. The inclusion of XP on NetBooks could certainly mitigate that, but I can see a marketing argument being made that if you want to easily install your own apps like you can on a desktop it will cost you a little more. That would be an interesting upsell. That said, if the recent predictions of 50 million units on the market in 2012 are to be believed, I would assume that all kinds of things will be different if we are to see those kinds of numbers become real. Ease of use would certainly be one of them.