Is RIM Delaying BlackBerry 10 Because It Sucks? (Updated)

Last week, RIM confirmed the bad news. BlackBerry phones with the company’s new BlackBerry 10 software would not be shipping until the latter half of 2012. RIM Co-CEO Mike Lazaridis, at the time, stated that the reasons was because RIM wanted to wait and outfit the devices with a new chipset, presumably LTE in nature.

However, a report from BGR, which cites a high-level RIM employee as the source of the information, says that Lazaridis was not telling the truth and that the delay has nothing to do with a chipset and everything to do with a poor product.

It’s apparently so bad, that the source said that “email and PIM [is better] on an 8700 than it is on BlackBerry 10.” 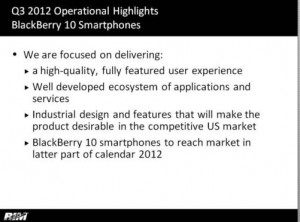 The RIM employee also goes on to say that BlackBerry 10 is a “platform and ecosystem that isn’t even as good as iPhone OS 1.0 or Android 2.0.” That’s a pretty hefty accusation considering how old those pieces of software are.

And, to sum everything up, the source claims that RIM “is simply pushing this out as long as they can for one reason, they don’t have a working product yet.”

2011 has not been a kind year to RIM and the BlackBerry faithful and it would appear, if this information is accurate, that 2012 might just be more of the same.

Update: RIM has responded in a statement to AllThingsD:

RIM made a strategic decision to launch BlackBerry 10 devices with a new, LTE-based dual core chip set architecture. As explained on our earnings call, the broad engineering impact of this decision and certain other factors significantly influenced the anticipated timing for the BlackBerry 10 devices. The anonymous claim suggesting otherwise is inaccurate and uninformed. As RIM has previously explained, and as Mike Lazaridis reiterated on the earnings call, we will not launch BlackBerry 10 devices until we know they are ready and we believe this new chip set architecture is required to deliver the world class user experience that our customers will expect. Any suggestion to the contrary is simply false.

Who to believe, who, to, believe.