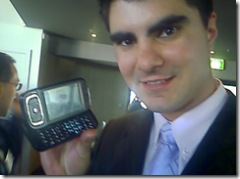 With the advent of WPF/e earlier this year (now named Silverlight) we have also been given the opportunity to empower our UMPC. Potentially we have the ability to create real finger driven applications which could even put the FUN back into FUNctional. While I haven’t had a chance to play with the iPhone (and nor do I want to) I did get a chance to play with the “HTC Touch” this past Friday. I found the finger based navigation really FUNctional and without a doubt it caused me to ask…where’s the same app for my UMPC? At the same event I also got a chance to play with the yet to be released HTC Kaiser. The callout for all software developers has been made – lets get those killer apps happening!

I shot this video of me playing with the HTC Touch using my Dopod 838pro,