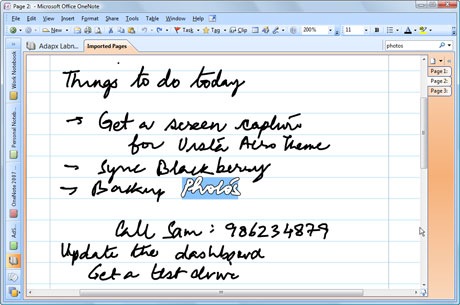 This morning I received an email from a long time reader asking the question in the title of this post. Here’s an except from that email:

I’m a vice president in a large company and have relied on my tablet for more years than I want to admit.

WHERE IS ONENOTE IN ALL THIS MESS?  I have a HP2730 and OneNote is without a doubt the most productive tool I have ever used.  I know we’re in the minority but is inking dead?  I’d love to have a light tablet but, no OneNote… no deal.

I’m sure he’s not alone. I sent back a reply and I’m going to expand on it a bit here even though for many I sure this is a tired conversation. But like our reader and some others I know, it is a topic near and dear to our hearts if not our workflow.

So, is Inking dead on a Tablet? I don’t think it is dead, but it certainly isn’t a priority for those creating devices that require a stylus and a digitizer to make it work. In my heart of hearts I hope any future hardware (note I said hardware) development on Inking is just in a state of suspension until someone in the crazy Tablet race we’re running these days sees it as a way to differentiate. Asus is certainly attempting to keep some form of digital inking alive with the EEE Note EA800 and at the moment they are the only one that is at least attempting that kind of effort, unless you include the HP Slate 500. Of course you can still purchase old fashioned Tablet PCs from the likes of Fujitsu, HP, Motion, and Lenovo, but we’re talking the newer devices here. But since Microsoft essentially gave up on Inking when it started the touch craze with UMPCs, no one has taken digital Inking that seriously.

Or have they? Software developers for the iPad have made some pretty impressive strides in my view and I’ve chronicled my experiments with many of those Apps including Penultimate, WritePad, Noteshelf, Note Taker HD, Notes Plus, and PhatPad to name a few. What’s impressive about some of these Apps is that they have created a solution to allow for Wrist Protection or Palm Rejection, making the Digital Inking experience possible. I look for that development to continue and I would hope that we’d see a similar kind of move on the Android front, but so far I haven’t heard any inklings in that vein.

But will that be enough to satisfy the real Digital Inkers out there? That all depends on your needs. Honestly, many of mine have been solved by a combination of Penultimate, Note Shelf, and iAnnotate PDF. But your mileage may vary.

The Lost Promise of OneNote

But as to our reader’s feelings about OneNote. My rantings and railings about this have grown even more tiresome than the debate about Inking. Calling it the App Microsoft doesn’t want the world to hear about has fallen on many a deaf ear. I agree that OneNote is one heck of a productive tool, not just for Digital Inkers, but even for those who don’t  have a Tablet PC. There is at least one third party solution out there called MobileNoter. It’s a combination of an App and a service that allows you to view and edit Ink notes on iOS and Android and sync back and forth with OneNote. The service requires a $1.25 a month fee, but the folks behind MobileNoter continue to advance things along, so if you’re looking for that kind of solution you might want to support them. And then Microsoft released an iPhone OneNote App to many a cheer. But for Digital Inkers it is primarily a waste of time because you can view Digital Ink notes on it. Quite frankly I view the OneNote App as symbolic of Microsoft’s head up the butt approach to Digital Inking as a whole and not just with OneNote.

Somewhere, somehow, some marketing maven convinced the world that there’s no money in Digital Inking. Perhaps that’s true. It certainly is true in the context of creating platforms to sell ads. I’ve said this before and I’ll say it again here. If there is going to be a resurgence in Digital Inking, I’m betting Apple will be the one to make it happen. They’ll announce it as if they’ve discovered it. They’ll perform their usual magic, and they’ll probably advance it further than Microsoft ever cared to. That’s no sure thing of course, but I will not be surprised if it happens some day.

Check out these posts on some of the iPad Inking Apps mentioned in this post.