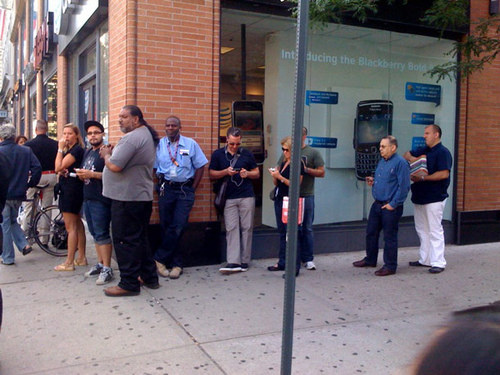 It is still too early to tell what is really going on and of course this is only over a smartphone and not something as life altering as BP’s oil spill in the Gulf of Mexico, but from a PR perspective, this might just be the straw that broke the proverbial camel’s back in the Apple AT&T marriage.

Again, at the moment no one from Apple or AT&T is commenting on what appears to be a massive failure in their combined systems for pre-ordering the new iPhone. But from what we are hearing, (and experiencing) it sounds pretty bad. Whether you try the Apple Store on the web or the AT&T website you’ll be met with errors, messages that your order can’t be processed, and well frustration. A local friend told me that he tried the local AT&T store and Radio Shack here (they are next door to each other) and neither could process an order, although AT&T would gladly take your credit card number and call you back.

Gizmodo is reporting that there may be some security issues going on, and other anecdotal failures as well. Many of the early finger pointing is being aimed at AT&T since other sites, including Apple, have to interface with AT&T to check on accounts before bestowing the “generous” upgrade pricing.

Technologically, this will all get worked out in the long run, although there will be some yelling and screaming. But Apple has taken a lot of flack for hanging onto its exclusive with AT&T for so long in the wake of that network’s failures that this might be just enough of a public humilation to change that pattern. AT&T has become such the butt of a national joke that is quickly moving beyond the cliche stage into the cultural icon phase. Apple had been on a roll on many fronts, but as the leader of the pack Apple has been taking shots from everyone including the Federal Government on its policies. So neither company is in a position to withstand a big disaster, which this will turn out to be if it goes on much longer. (I think the problems have been running for about 7 hours or so now.) Neither Apple or AT&T are free flowing when it comes to communicating problems (witness the iPad security breach) and look for ways to save face more than to assuage frustrated customers, so it will be interesting to see how this whole thing plays out.

Of course once it is all worked out, it will be interesting to see if the demand that is obviously contributing to the server and system issues continues at the same pace. It’s easy to let people laugh at you when you’re making money hand over fist at their expense. But you can only play the “heavy demand” spin game so far and so many times. With the baggage that has accompanied the iPhone/AT&T saga so far, it might prove to be too heavy a load to spin it that way again.