Is the iOS Facebook App Unusable for You Too?

Last month, I told you about how my experience with iOS 5 and my iPhone 3GS had been a phenomenal one. Many of you wrote in to agree with me and many of you had a difference of opinion. Well, after a month of use, we’re still par for the course. I haven’t had any major problems with any of the new features, I haven’t seen any insane battery drain, and I haven’t seen any heavy lag.

All is good in the land of Apple.

However, it’s a different story for an application that I use a lot, an application called Facebook. Prior to iOS 5 and all of the changes to the Facebook application, my experience with the iOS app was outstanding.

In fact, I probably used the mobile app more then I used the actual website.

It was that good.

But all has changed in the last month or so. What started as something minor has spiraled to the point where I honestly don’t want to use the application anymore. Remember, this was an application that just a short time ago, I used to love.

So, what’s the problem?

Just about every time I load up the application and start using it, I stumble onto some kind of bug. Two of the head scratchers include clicking on comments on a video or a picture and instead of being taken to said comments, I get taken to the content instead. Trust me, when this happens 10 out of the 15 times you try and click something, it becomes annoying. 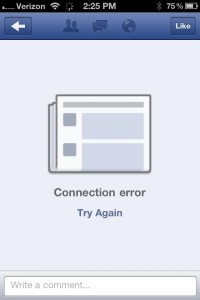 This is an all too familiar sight.

I also seem to manage to land on connection error’s half the time I try and look at a photo or video from my phone or iPad. I repeatedly click ‘Try Again’ and guess what? Nothing happens. One of our editors, Josh Smith, has the same problem with videos.

Or how about this.

I also get random notifications, notifications that don’t go away, Pending Items that I can’t accept or decline, and other smaller things that drive me crazy.

I was so fed up yesterday that I fired up an Android device and opened Facebook.

Facebook’s Android app is notoriously far behind iOS in terms of features but, after using it for 10 minutes or so, I would take it over the current iOS version.

Until Facebook releases an update that exterminates these bugs, I am going to stop using the app. It’s not going to be easy. I’ve been using the app since it first arrived and I have come to rely on it.

But I just can’t take it anymore.

Any of you feeling the same?