The iPhone 6 is now out in full force after over a month of being on the market. It’s Apple’s latest flagship smartphone and while many consumers are looking to buy the latest and greatest, other buyers are looking at older iPhones for a cheaper deal.

Apple still sells the iPhone 5c, and you can grab one at no cost if you sign a two-year contract. This is a big deal if you don’t want to spend any money up front, but is the iPhone 5c still worth buying?

The iPhone 5c hasn’t been Apple’s most popular iPhone, but it does provide frugal users with the opportunity to get the iPhone experience without spending a lot of money. The device was originally released last year alongside the launch of the iPhone 5s and was meant as Apple’s cheaper option, sporting a plastic body and a lower cost of $99 after contract.

However, the iPhone 5s still proved to be the better model, since it was only $199 after contract and came with way more features that justified the higher cost. Many buyers saw that and took advantage of the iPhone 5s, leaving the iPhone 5c behind.

However, now that the device is a year older and there’s a newer iPhone out, should consumers completely dismiss the iPhone 5c, or is it still a viable option for frugal consumers?

Before we can really see if the iPhone 5c is still worth buying to this day, we have to compare all of the options that Apple has available.

The way we see it, 8GB might not be enough for some users, but if you’re thinking about grabbing the iPhone 5c, you most likely aren’t a heavy smartphone user anyway. Thus, 8GB might actually be enough for you if you don’t plan on storing a lot of files on your phone (like music, apps, games, etc.). 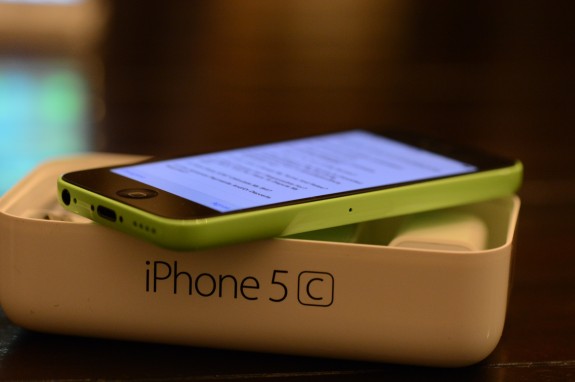 The iPhone 5c comes with a slower (but still capable) processor, and it also comes with an inferior camera when compared to the iPhone 5s. It also doesn’t come with a fingerprint sensor and just sticks with the regular home button that we’ve grown to love over the years.

Is the iPhone 5c Worth It?

What’s perhaps the biggest selling point of the iPhone 5c is the different color options you can choose from. It comes in white, blue, green, red or yellow, and it adds a bit of character to your iPhone, which is great for the younger crowd or those who simply like to be festive. However, the shell that encloses the iPhone 5c is plastic, so if you prefer a metal and glass design, the iPhone 5c may not be the device for you.

However, you’ll pay a bit less for the iPhone 5c, priced at $0 when you sign a two-year contract, or $450 when you buy the device without a contract. Plus, you can usually find used iPhone 5c units on eBay for around $200, including 16GB models that Apple currently doesn’t sell.

The iPhone 5s, on the other hand, usually goes for around $350 on eBay. Still, though, if you’re looking for low-cost iPhone, the iPhone 5c is great and all, but you’d actually be better off spending $100 extra dollars in order to get the iPhone 5s. It comes with a metal design, Touch ID, a way better camera, and a faster processor.

At the end of the day, you get what you pay for, but that’s not a slight to the iPhone 5c by any means. You still get a decent smartphone at no cost, but the iPhone 5s will offer a much better experience if you think the iPhone 5c won’t fulfill your wants and needs.