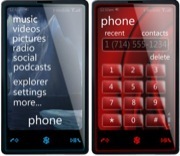 No real confirmation on this yet, but lots of chatter, which could mean absolutely nothing. The chatter is that Microsoft may unveil a prototype Zune phone at CES in January, codenamed Ã¢â‚¬Ëœ’Pink.’ Of course the usual denials abound and some say this is probably not going to be ready until later in the year.

The device would combine Zune technology with technology from Danger (the folks behind Sidekick) for an iPhone competitor.

At least it is something to speculate about over the holiday.