For a second, I thought that one of the greatest hip hop artists of all-time had come back to life.

There I was at day three of the Coachella Festival in Indio, California, watching two artists that I grew up listening to (sorry, Mom), Dr. Dre and Snoop Dogg, when all of a sudden, a familiar voice burst over the loud speakers.

And just like that, Tupac Shakur, or someone or something that looked like him, had emerged from the dead.

At first, I couldn’t believe my eyes. Right there in front of me was someone whose death had been the source of conspiracy theories from day one. Whatever this thing was, it sounded like Tupac. It looked like Tupac. And it even addressed Snoop Dogg, Dr. Dre and Coachella itself.

I looked over at two of my buddies.

Their jaws were on the floor.

In fact, no one around me – I was pretty far in the back – was moving. How are you supposed to dance when a rap legend, long thought to be dead, comes back to life?

It took me a little bit to figure it out but soon I realize that I wasn’t looking at Tupac Shakur the man.

Instead, I was looking at a hologram.

I still couldn’t believe my eyes.

I had heard about these holograms before. Apparently, they are very prevalent in Asia. But I hadn’t ever seen one in person until Tupac made his return to the stage.

I actually stopped listening to the music for awhile and focused on what was actually happening on stage. Here was a hologram that was rapping and talking, just like Tupac, all while interacting with Dr. Dre and Snoop Dogg.

On more than one occasion I had to rub my eyes to make sure that what I was seeing was real.

Indeed it was, and thanks to MTV, we have the full story on how Dr. Dre brought Tupac back to life for this performance.

The company that was tasked with creating the image of Shakur, who was killed back in 1996, was Digital Domain. For those unfamiliar, Digital Domain was behind the CG in movies like The Curious Case of Benjamin Button and TRON: Legacy.

Translation: They are very good at what they do.

So good, that they were able to fool me into thinking that Tupac, complete with his jewelery, tattoos, boots, had seemingly come back from the grave. 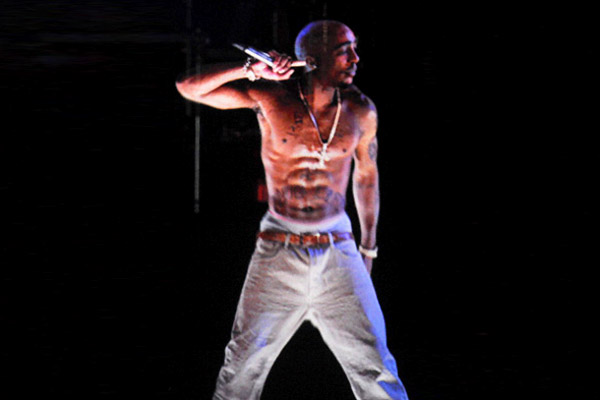 Of course, this isn’t the first time that a hologram has been used in a concert but it makes you wonder about the future of live music acts.

If this company can bring the likes of Tupac back to life, then why not Michael Jackson?

As the Tupac Shakur hologram vanished into thin air at the end of his two song resurrection, something profound crossed my mind.

We’re living in the future.

Almost immediately I thought of the John Coltrane hologram that Tom Cruise had in his apartment in Vanilla Sky.

Clearly, we’re not at that stage stage yet. The Tupac hologram apparently took four months to create and it cost between $100,000 to $400,000 to create.

However, I wouldn’t be surprised to see this kind of thing happen a lot more now that Dr. Dre and Snoop Dogg brought it to the mainstream.

Problem is, I don’t think we’re ready for it.

After the performance, I asked a few of my friends what they had thought of the hologram and the consensus was that it was incredible but also incredibly weird.

I felt the same way.

What’d you think of the Tupac hologram?