A lot about touch technology in the news lately and gestures in the Tablet/UMPC arena are nothing new. However they might be in for a really big twist if this technology spreads it’s wings. Just imagine literal gestures with your hands controlling your device. Admittedly this article is referring to very small devices like MP3 players and the sort for now, but just imagine for a minute the possibilities in the UMPC and tablet market. We have seen references to Minority Report-like technologies with announcements of the “Surface Computer” promoted by Microsoft. The BIG difference: no physical touch required! Just a small sensor mounted on your wrist that recognizes gestures. We GBM’ers know all about gestures. You don’t get to wear high tech gloves like Tom, but heck, that’s OK by me! I thought they were a bit much; sort of like Rob and the OQO belt buckle thing. :) I think we all can agree that a watch sized geek accessory would not be a fashion fopa. Would it? 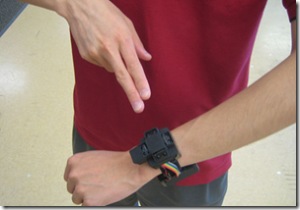 “It won’t be long now before all electronic devices go “nano,” and shrink to the size of frosted mini wheat square. You won’t know whether to turn it on or eat it. But the real question is: How do you press those teeny buttons?

One group of researchers wants to do away with the keyboard altogether. They’ve designed a wristwatch that recognizes hand gestures and uses them for touch-free control of electronic devices such as MP3 players, cell phones, and home appliances. The technology could also be used by a doctor to control a medical device during an operation.

The Gesture Watch has five infrared sensors, four of which sense any hand motion that occurs above the watch. For example, if the user is wearing the watch on his left hand, he can move his right hand over the watch in an up or down, left or right, or circular motion. Different combinations of these movements communicate an action to the watch.