When it comes to iPhone 6 concepts, most of the time we are stuck with artist renderings, but today we have our first look at what could be Apple’s iPhone 6 concept — and it’s one of most exciting yet.

Apple is no stranger to iPhones with glass on both sides, but a new vision for the iPhone includes wrap around glass. Not only does the glass wrap around this display, but the screen encompasses the front, back and sides of this iPhone concept.

This iPhone concept comes directly from the labs at Apple, by way of the U.S. Patent office, and gives us a look at what a future iPhone, perhaps even the iPhone 6 could look like

Patently Apple discovered the patent for an iPhone with a display on the front and back of the device, and delivers details about how such an iPhone could work. 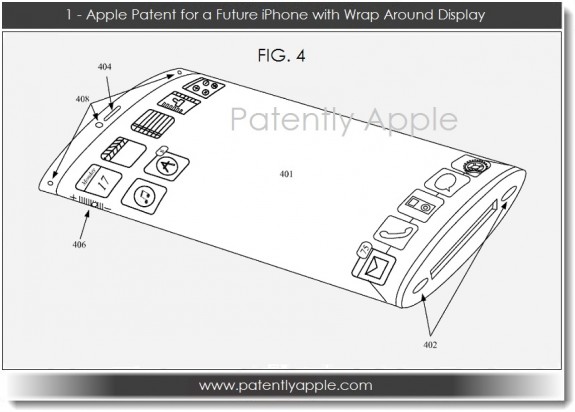 Is this Apple’s own iPhone 6 concept, or just another patent?

The patent drawing shows an iPhone with room for 5 icons on the dock and across the home screen, which seems to point at a larger display than the iPhone 5. There is also no home button, which is something Apple iPhone 6 prototypes reportedly feature.

In addition to the lack of a home button this iPhone concept replaces the volume buttons on the right side of the iPhone with virtual controls where the screens seem to meet. The patent accommodates a multi-touch gesture to toggle the mute option.

This dual-display iPhone uses two flexible smartphone displays in one device. Such an iPhone would allow users to show information independently or as one. This would allow a user to watch something on one display and show something on another. As the user cannot see the second display this could lead to some big carrier branding or iPhone games that use the second screen to show advertisements while a user plays a free game. Of course it could also make for some really innovative dual screen multiplayer games on the iPhone.

In addition to independent displays, this iPhone patent covers the ability to show photos or videos in a continuous loop, turning the iPhone into centerpiece or showpiece of sorts. The two displays could also reportedly be used to show 3D content.

We aren’t to the point where flexible displays are the norm yet, but by the time Apple delivers an iPhone 6 in 2014, advances could open the door to flexible displays, or at least displays that are flexible enough for applications like this where the screen is curved into a fixed position.

The photo below shows a flexible Sharp display which could potentially work in an application like this iPhone 6 concept. The screen technology Sharp showed off is not available to manufacturers yet, but there are rumors Apple and Sharp are working on a display for the iPhone 6. 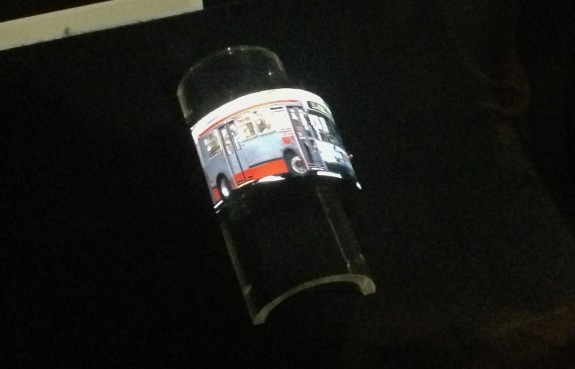 A flexible display from Sharp that shows off technology similar to what this iPhone concept requires. Screen tech that could potentially come to market in 2014 in time for an iphone 6.

In this iPhone patent, we see an older style dock connector because the patent was filed before Apple introduced Lightning. If Apple is planning to use this design for an iPhone 6, the phone would no doubt feature a Lightning connection.

The patent reveals an iPhone concept that could use aluminum or a transparent glass for the body of the iPhone. An all glass iPhone 6 with displays on both sides could certainly present challenges to durability and protection from drops, but stronger glass is reportedly on the way which could eliminate the need for cases.

Sapphire is already in use for the iPhone 5 camera lens, and synthetic Sapphire could help this concept go from patent to iPhone 6. In the video below, we can see a screen that is harder than glass, which should only take a beating from diamonds. The Sapphire glass is strong enough to survive repeated blows and grinding from a piece of concrete.

As Cnet mentions, this new type of smartphone screen is expensive to make, but we don’t expect the iPhone 6 until 2014, which gives companies time to increase the yield and decrease the cost. If Apple were to make an iPhone 6 with two wrap around displays, the added expense of Sapphire could go a long way to preventing warranty claims.

This design doesn’t include any visible cameras, but the patent discuses multiple cameras, including one that could track the user to make sure the correct display is showing them the right content.

There’s always a small chance this is the iPhone 6 concept Apple is looking at in some capacity, but the company routinely files patents for ideas large and small that never see the light of day. The iPhone 6 is likely set for 2014, and based on past performance it would be the next major iPhone revision, which would likely include a new design.

For more check out another great looking iPhone 6 concept that is waterproof and has no home button.