It seems Sony is taking on the camera abilities of the Nokia Lumia 1020 in more ways than one. In addition to launching the photography-focused Honami i1 later this year, also seems to be preparing for the début  of a series of camera accessories for iPhone and Android devices.

According to pictures and information sent to SonyAlphaRumors, Sony will attempt to out-flank other smartphone vendors by providing a series of add-on camera lenses for smartphones. Dubbed the DSC-QX10 and DSC-QX100, each lens will actually feature a built-in imaging sensor, imaging processor and SD memory card slot, allowing users whose smartphones may not necessarily be endowed with terrific cameras, to take professional level photos. 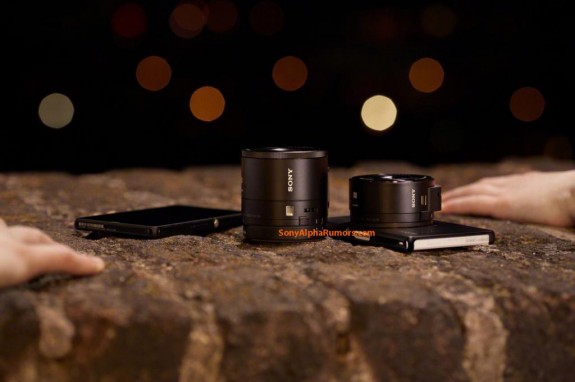 Reportedly, each lens actually has magnetic surface that allows them to easily attach to an iPhone or Android device. The lenses would then be able to connect to an application on the user’s device by creating a local wireless network or by a built-in NFC or near field communications chip embedded on the lens and in the user’s smartphone.

One of the new attachments or “lens-camera” as Sony is calling the devices, will feature the same lens and camera optics as the Sony WX150 professional camera Sony already offers. That device sports a 10X optical zoom ability and has an 18 megapixel sensor.

The other lens-camera could include an even bigger lens, and an imaging sensor that’s as big as 1-inch. This would be the same sensor from the Nikon 1 camera system, that’s used by many of today’s camera professionals.

Unfortunately, there’s still no release date or pricing, but it’s likely that Sony will have more to share about the lens-cameras when it debuts the photography-focused Sony Honami i1 this September, according to reports.

Sony could be on to something with these lens-camera concepts. While all users are not in the market for a camera-centric smartphone, most consumers want to capture photos in the best way they can. For some users, being able to pick out a smartphone and add enhanced camera optics, might be a no-brainer.

In addition to being a practical third-party accessory, users won’t have to constantly carry around a large phone with enhanced camera optics isn’t necessarily a bad thing, either. The Nokia Lumia 1020 has received high-marks for its 41 megapixel camera, however that camera comes at a price. The device has a rather large sensor area on its rear that makes the camera noticeably bulkier in the hand.