A new image of a phone bearing HTC’s and Verizon’s signature design ethos has begun to appear online, leading many to speculate that what we’re seeing is actually the much rumored HTC phablet that will be landing on Verizon’s 4G LTE network. The phone has red accents, a protruding camera lens and the Beats Audio branding on the rear. Additionally, it has a sticker with the device’s serial number and other identifiers similar to the unibody HTC One X on AT&T, which perhaps can suggest that this phablet will have a non-user-replaceable battery like the One X. 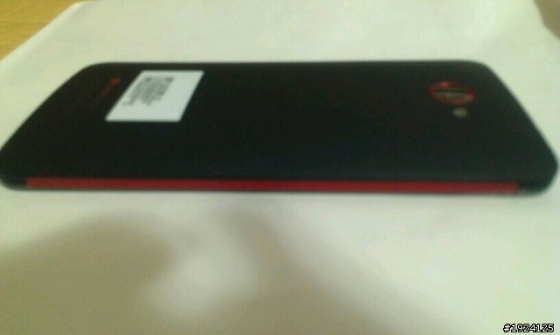 The image of the rear side of the phone has been posted on The Verge.

The phone will likely have to compete with the LG Intuition 4G LTE when that device launches on Verizon along with the first and second generation Galaxy Note phablets from Samsung. However, unlike these other devices, it looks like rumored and leaked specs for the HTC-made tablet suggest that HTC’s device will be more powerful.

Preliminary leaked benchmarks suggest that the Snapdragon S4 processor may be either a quad-core or upgraded dual-core model as the benchmarks for the device show that it is considerably faster than other dual-core S4 models on the market today. Additionally, it will have a full HD 1080p display with a 1794 X 1080 resolution.

It’s unclear if and when this model will launch. So far, neither Verizon nor HTC has announced the phablet.