Several iPad 3 leaks have claimed that the back of the device will look much similar to the current iPad 2, but thanks to a new pair of leaks, we are getting a good idea what the iPad 3 looks like.

The first look at the iPad 3 comes via Apple Daily, which posted photos of the iPad 3’s camera and of the iPad 3 back cover, showing a larger camera lens and a tapered design that looks like the iPad 2.

In the image below, you can see the iPad 2 vs. the iPad 3 camera lens. Notice the larger lens size on the iPad 3, which points to the upgraded 8MP camera that we expect in the iPad 3. The camera could be the same Sony camera in the iPhone 4S, a camera that performs incredibly well. It is worth pointing out that there is no flash for the camera, so you’ll want to stick to well-lit environments. 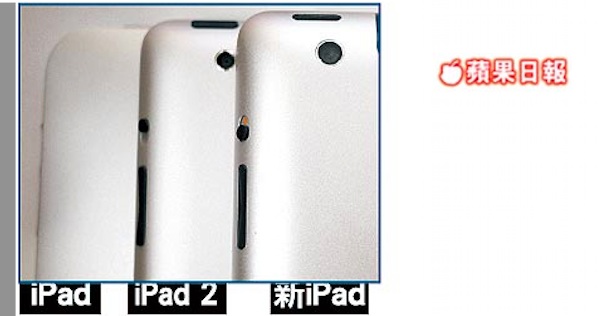 Comparison of the iPad 3 camer and back to the iPad 2.

Apple may announce the iPad 3 on March 7th along with iOS 5.1 and possibly a new Apple TV. We expect an iOS 5.1 release date fo March 9th, two days later.

The iPad 3 release date has not been confirmed, but our best guess is that Apple will start selling the iPad 3 in retail stores on Friday March 16th, similar to the timing on the iPhone 4S launch.

So far we have heard conflicting reports about the processor, which may be a quad-core Apple A6 processor capable of pushing more intense apps. There are rumors of a 4G LTE connection for AT&T and Verizon, which would allow the iPad 3 to connect at speeds 10 times faster than the iPad 2 3G + WiFi. The video below shows off the difference in speed between 3G and 4G LTE in this video below.

Stay tuned for the latest iPad 3 news and coverage.