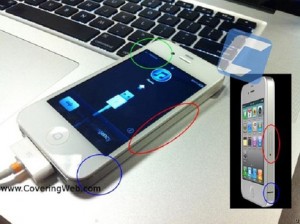 Consider this rumor for now, but a leaked image of a white iPhone with a slightly different build than the iPhone 4 that is being offered on GSM networks across the world including AT&T has surfaced. That image shows a white iPhone model with a slightly different body, no SIM try as Verizon Wireless doesn’t use SIM cards on its CDMA/EV-DO smartphones, and also a Verizon Wireless carrier logo on the upper left hand corner of the screen.

The modified body doesn’t have seams around the metal band that Apple uses for structural integrity in designing the iPhone as well as for the iPhone 4’s antenna, suggesting that the modified design may eliminate any remnants of the Antennagate debacle of this past summer. As to the Verizon Wireless carrier logo, it could either be a legitimate test model that’s been photographed or just another GSM model that’s been jailbroken and hacked to show a different carrier identification in that screen space.