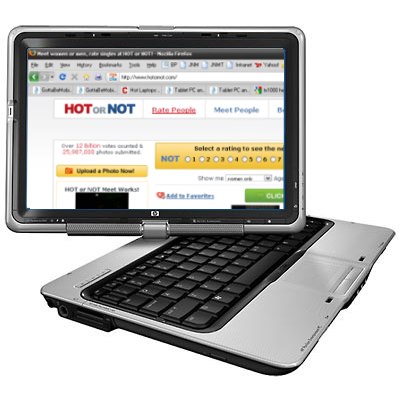 Almost since its debut, we’ve known the tx1000 convertible notebook (with optional touchscreen) from HP were hot devices – literally. In the user reviews I read of the notebook, heat was a recurring theme. At the time, however, the issue seemed to be one of comfort, not operation. Now, a couple years later, the long-term effects of the heat problem are manifesting as system failures.

The Consumerist puts a tx1000 user named Bobby at the forefront, sharing his story of heat-related failure and worse: his inability to get help from HP.

The catch is none of us can get HP to do anything. They know it is a problem, it is all over their own message boards (and never with an official fix- that would admit it is a problem), and they won’t do anything about it. it is the heart of what they sold me failing, in a years time, and a $400 fix- almost 1/2 its original cost.

I dug further and found several other users who confirm his story. The problem stems from the GPU either being damaged by the heat or damaging itself by overheating. Unfortunately, the problem has only started to manifest in the past year or so, after most early buyers’ warranties have expired.

There is a fix, but it involves removing the motherboard, heating the GPU with a lamp (or, as others have reported, a hair dryer), and affixing a penny to the GPU as a heat sink. Video demo on YouTube (and posted below), along with comments confirming the results. Definitely not for the feint of heart (I’ve never gone as far as removing the mobo from a working PC), but it seems to do the trick. If you’re not knowledgeable in electronics, I’d recommend consulting and/or hiring someone who is before trying it yourself.

Has anyone run into this problem or tried the fix? I checked our forums for mention of the tx1000 problem and came up empty. What about tx2000 and tx2 users? Any major heat problems, or do you think the problem is limited to the 1000 series?