AT&T and its partners haven’t yet managed to convince large swaths of users to pay for everyday items with their Isis mobile payment system, but it looks like it’s going to give up easily. After formally launching the NFC-based payment method last November, it seems the Isis group is going to try getting iPhone buyers using the technology with a case that includes Isis payment compatibility.

To be clear, AT&T or Isis hasn’t formally announced the new case yet. Instead, photos and information sent to Engadget have completely detailed the upcoming NFC-equipped iPhone case. Dubbed the Incipio Cashwrap, uses will be able to place their iPhone into the case and load its matching iPhone app so that they can pay for gas, groceries and more without ever having to pull out their wallet. 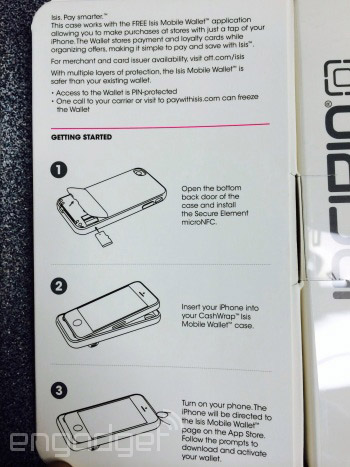 Unfortunately, that doesn’t mean users won’t have to pull out their wallet at some point. Reportedly, the Incipio Cashwrap will cost $70 when it officially debuts at AT&T. That’s pretty pricy for a smartphone case that only covers the rear of the device and provides compatibility with an extra service users might not necessarily want to embrace in the first place.

So far, there’s no indication that AT&T and its partners are planning to release Isis-ready cases for other devices. Isis requires smartphones to have an NFC chip that can wirelessly communicate the user’s payment information over very short distances. Almost all high-end and mid-range Windows Phone and Android smartphones come with an NFC chip built-in.

None of Apple’s iPhones include NFC chips, which is why users of those handsets will need this $70 case to use Isis.

Isis formally launched nationwide this past November. Backed by AT&T, T-Mobile and Verizon, the payment method has quickly spread to smaller retail stores. Currently Coca-Cola vending machines, Aeropostale, Radio Shack, Macy’s, Foot Locker and CBS are equipped to take Isis mobile payments so that users can simply pay for their purchases with their smartphone.

There’s no word on when AT&T is planning to formally launch the Incipio Cashwrap.