AT&T, T-Mobile and Verizon users can finally begin making everyday purchases with their smartphone thanks to the nationwide rollout of the Isis NFC payment system.

AT&T formally announced the nationwide availability of Isis this morning, noting that users could now begin paying for their purchases without actually having to remove their credit card or debit from their wallet. The software and technology are close relatives to the Google Wallet app that Google hoped would take the wireless payments world by storm. Unfortunately, AT&T, T-Mobile and Verizon all worked together to block Google Wallet, in the hopes that their own custom-made solution would be more popular.

The group says that users can begin using unlocking their phones and paying for goods at Coca-Cola vending machines, Aeropostale, Radio Shack, Macy’s, Foot Locker, CVS and more. Users can purchase accessories and new devices at T-Mobile, AT&T and Verizon Wireless retail stores with the technology as well. 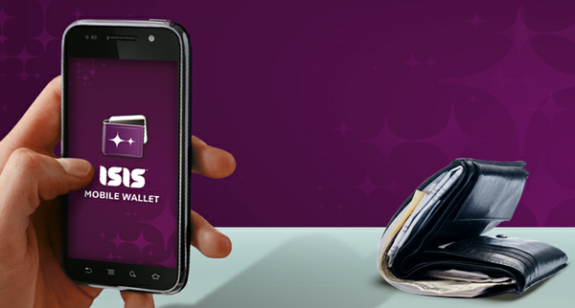 While Isis might become popular one day, it won’t get there thanks to a streamlined set-up process. Users who want to begin paying for goods with their smartphone today will need to have one of the Android devices that have been certified for Isis usage on their carrier. They’ll also need to head to their carrier’s retail location to pick up a new SIM card that has a special “secure element” that encrypts their payment information. They need the Isis Mobile Wallet application from the Google Play Store too.

Users without an American Express or Chase card are required to offload money into a sort-of digital prepaid American Express Serve account before they can use Isis as well. Capitol One pulled its support for Isis this past September.

Isis didn’t announce any plans to add iOS-based devices like the iPhone to the line-up of devices its supports. That’s not news – Apple’s iPhones don’t include the special near field communications chip that allows smartphones to talk to other devices wirelessly over short distances – however, it is a bit surprising that the Isis doesn’t support Microsoft’s Windows Phone. Every high-end Windows Phone includes an NFC chip, and the Windows Phone operating system already has software support for NFC payments. To date, not a single carrier in the United States has enabled NFC payments on a Windows Phone.