In a preliminary decision handed down by a judge from the International Trade Commission, Some devices in the Samsung Galaxy line are infringing on Apple’s text-selection patents.

The March 26 decision, which now heads to the entirety of the International Trade Commission for consideration, is part of a two patent case that also included a handheld device’s ability to detect when a microphone is plugged into its headset jack.

If Samsung’s products are found to be infringing on Apple’s patents, the International Trade Commission can order that it be barred from importation into the United States. 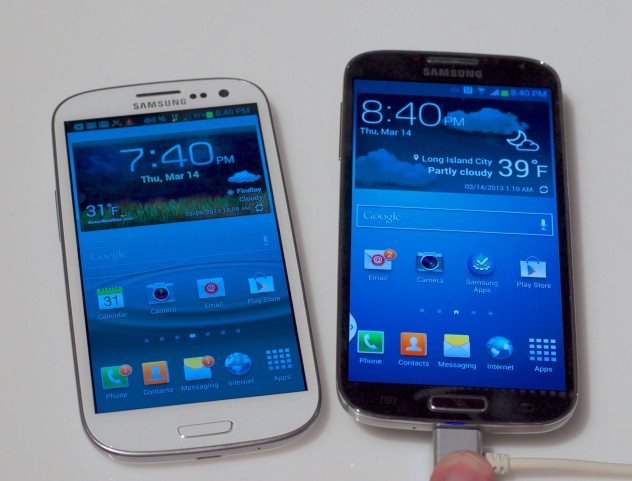 Two of Samsung’s Galaxy S series of smartphones, the Samsung Galaxy S3 and the Galaxy S4.

Last summer Samsung was found guilty of having infringed on Apple’s patents in some of their most popular mobile devices including the Samsung Galaxy Tab and the first Samsung Galaxy device by a court in the United States.

These patents were related to the design of the iOS home screen as well as the rear-casing design of the original iPhone. In that case Samsung was ordered to pay 1,041 billion in damages to Apple. Samsung had alleged that Apple was infringing on its patents with the iPhone 3G, iPhone 3GS, and the iPhone 4. These allegations were not upheld by the court.

By cornering each other with patents both Apple and Samsung hope to gain the upper hand in a market that uses patents as currency and leverage.

So far Apple and Samsung are tangled in a legal battle in 10 countries with each case in acting as a proverbial grudge match for the two company’s cut-throat battle for smartphone market share. Apple’s iOS is currently being outsold by sales of devices running Google’s Android operating system.

Microsoft, whose mobile operating lags behind Android in terms of devices sold, received a royalty payment for each device sold from 50% of all hardware manufacturers who use Android on their devices because of software patents it alleges Android violated in 2011. This list of vendors includes heavy hitters like HTC and Samsung who’s widely anticipated Galaxy S4 is due to launch this month. In 2011 the number of payments from Android manufacturers to Microsoft totaled $700 million.

By attempting to control lower level patents that are used widely, both Apple and Microsoft are looking to slow the growth of Android. As Android is open source and distributed for free, competitors have taken to going after equipment manufacturers who use it on their devices instead of Google itself.