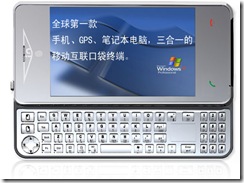 Ok, so I’m really confused now. I mean, it doesn’t take a lot to confuse me, but still. Just a few days ago, I reported on the Nokia N900 that will blur the line between MID/UMPC and smartphone. Today, In Technology Group used Computex to release the xpPhone, a phone that runs XP (or a MID/UMPC with telephony functionality). In direct collaboration with AMD and Microsoft, device has some impressive specs. From what I was able to decipher using Google Translate, the xpPhone will run a full XP OS using AMD’s Super Mobile processor. The device features a 4.8Ã¢â‚¬Â 800×480 touch screen, an available 64GB SSD, have wifi, GPS, GSM, and all three major 3G frequencies built in. No information was given on availability Stateside. More pictures after the jump.

Check out the site (via Google Translate) here.