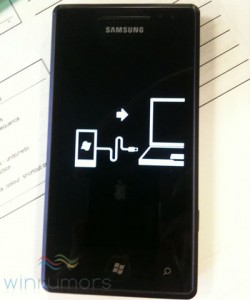 We had previously reported that Microsoft is rolling out a small maintenance update over the air (OTA) to Windows Phone 7 users, however issues related to the update is prompting the mobile OS-maker to advise users to hold off on performing the update if they haven’t already done so.

While the current update doesn’t add much for the user at this point, it does pave the road for Microsoft to deliver future features to Windows Phone 7 handsets, such as copy and paste, which was missing at the platform’s debut.

Users who have performed the update have noticed that their devices are now “bricked,” or left in a non-functional state. Mostly, Samsung Omnia users were affected by the software update glitch and noticed on the phone’s screen that there were instructions to connect the Omnia to a PC to perform a hard reset or full wipe. Doing so does not rectify the situation, and Windows Phone 7 support from Microsoft is now suggesting that users return their devices to stores to get them exchanged. The support memo was issued over Twitter as well.

Via the official support forum from Microsoft, the development team is advising users who have yet to perform the update to hold off on doing so. The company is working on a fix, which should be delivered in several days:

We would recommend at this time, not to retry the update, as subsequent attempts will fail similarly. While we continue to investigate the issue, we would ask that you not attempt the update until your device alerts you of another update opportunity, in approximately 3 days’ time.