It’s easy to take tech for granted when you live in an area that’s home to so many techies and the companies they’ve built.   But every once in a while I still get a rush when I realize the density of cool companies we have here.

I met with Ziv Gillat, one of Eye-Fi’s founders, to sho0t an InkShow an at the company’s headquarters. I parked in front of Eye-Fi and immediately noticed that they had quite a few neighbors that you’re probably familiar with. The stuff that’s made in this one little office park is simply amazing. Evernote is my go-to note taking tool since there are clients for every device I use, FriendFeed is an incredible sharing site and Eye-Fi is changing how people share and store images. I’ve never use The Find before, but that’s probably because I’m not fashionable enough.

I didn’t realize Evenote was so close to Eye-Fi, otherwise I would’ve tried to setup an appointment with Evernote today. I did manage to get in touch with an Evernote contact while I was visiting Eye-Fi, but we had schedules.   I’m going to try and stop by Evenote after I meet with Fujitsu next week. 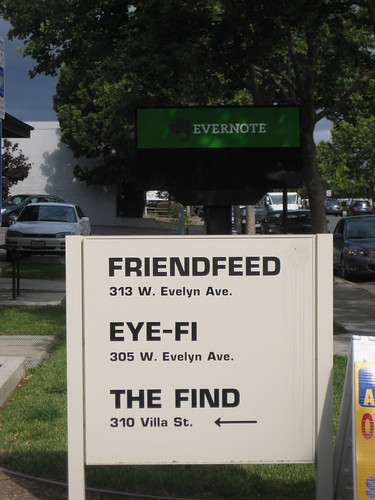