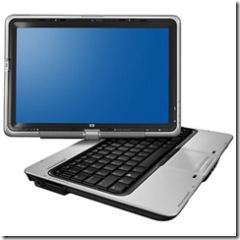 Great stuff by Steve Tilley, of TorontoSun.com, on the differences between HP’s TX1110 and TX1120. One supports touch and the other doesn’t, even though both have swivel screens. In addition, the inking aspect of the TX1120 is really poor, sometimes worse than other passive touch displays.

In short, Steve recommends: if you want a touch based tablet pc to do inking, keep looking. If you want laptop with a screen that just swivels and don’t need the touch / inking support, then the TX1110 might be for you.

Here is a snippet and a link to the full article:

When is a tablet PC not a tablet PC? It sounds like some sort of profound philosophical question, like the one about the tree falling in the forest when nobody is there to hear it, except the raccoon it lands on and squishes.

But it turns out the answer is actually quite dull and straightforward. See, both of Hewlett Packard’s new teensy-weensy notebook computers have swivelling screens that allow the display to be twisted around 180 degrees or even folded back against the keyboard. But the difference between a tablet PC and a notebook PC with a twisty screen can be found in the immortal words of MC Hammer: You can’t touch this.

Tablet PCs like the new HP Pavilion tx1120 ($1,699) incorporate touchscreen technology, allowing you to use the included stylus to click on icons by tapping the display, or even write digital notes by scribbling directly on the screen.

Watch our InkShow on the TX1120 from CES