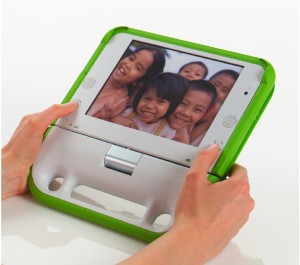 I’ve been an admirer of Nicholas Negroponte and the One Laptop Per Childe (OLPC) initiative since I first heard about the ideas to place low cost computing devices into the hands of the underprivileged around the third world. Great idea.

I’m not so sure about this one though. According to PC Magazine, apparently Negorponte’s latest is to drop Tablets out of helicopters, with no instructions or instructors. The plan would be to then check back in a year and see what progress the kids had made. I’m not making this up. Negroponte pushed the idea in a speech at the Mobile Summit.

He’s basing this idea on Sugat Mitra’s “Hole in the Wall project, in which kids in a rural area were given an unintended computer and then proceeded to teach each other how to use it.

Negroponte feels comfortable with new tablet designs that can be dropped from 30 feet and still function in the rain.

So, if there’s no human follow up, I’m assuming there’s no human prep for this to occur within the area that the Tablets are to be dropped. Can you imagine the looks on faces when they see Tablets being dropped out of a helicopter (or any product for that matter) on some unsuspecting rural village?

I don’t want to completely poo-poo the idea here because I can see some merit in the concept. That said, this quote by Negroponte, “Adults may be able to steal it, but they won’t be able to use it … maybe an older brother will get a hold of it, use it for pornography – that’s life,” points to just one of many potential pitfalls I can see.