A German music distributor is asking artists to prepare photos for an iTunes 11 release in the next few days according to a MacRumors report.

The German music distributor Feiyr sent an email to its artists asking them to submit photos for use in iTunes 11. In iTunes 11, users can look through photos and photo galleries of artists within the application, but the artists or their representatives first have to provide the photos for the app.

The email says iTunes 11 will come out “within the next days,” which likely means sometime next week. Apple previously said iTunes 11 would come out in October, then delayed the release until late November so it could make sure the app was ready. Because Apple gives its employees off the entire week of Thanksgiving it will likely wait until next week to release the new iTunes. 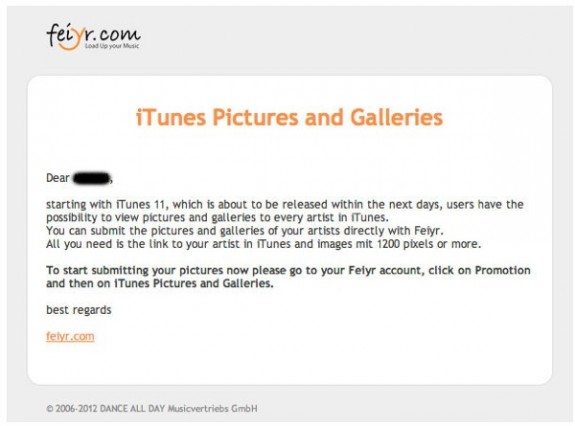 Given Apple’s history of releasing big updates, iTunes 11 will likely come out either next Tuesday or Wednesday. Apple typically releases iTunes updates on Wednesdays, but that’s because it typically holds events on Wednesdays and puts out the updates the same day. Outside of events, Apple usually releases new products on Tuesdays.

The new iTunes 11 will bring deeper iCloud support into the desktop music app and a new way to view albums which is why Apple needs photos from artists. Other big improvements include the ability to easily queue up songs as well as a new mini player.

The deeper iCloud integration in iTunes 11 will let users see all of their available content, and not just the content they downloaded to their device. It will also let users easily pick up a movie, TV show, podcast, or audiobook where they left off on any device. That means users can start watching a movie on a desktop then start it again from the same spot on their iPad or iPhone.