The WSJ report is a profile on Eddy Cue, the Apple executive in charge of iTunes and the company’s online services. The report mentions that iTunes 11 “is expected as soon as Thursday.” The cause of the delay according to the report was engineering issues, which meant the developers had to rewrite parts of the music app.

iTunes 11 will bring deeper integration of iCloud, which Cue also oversees, into the app. It will let users stream music they once purchased from iTunes without downloading the song again. The feature is already available for iTunes Match users, but with iTunes 11 everyone will get a taste of the service. 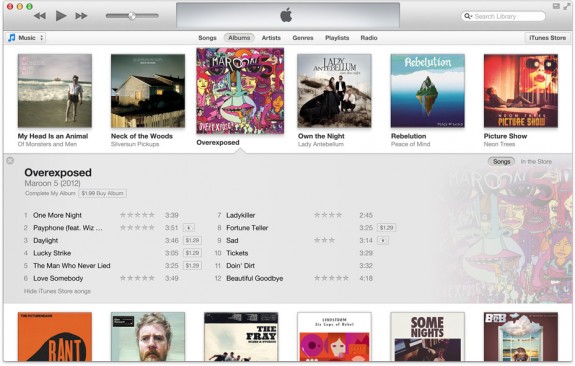 The deeper iCloud integration will also extend to movies and TV shows. With iTunes 11 users can start watching a movie or TV show on their computer and pick it up on an iPhone or iPad in the same spot where they stopped.

The music app also features a new design, a new album view for music, a redesigned mini player, and the ability to easily queue up songs.

Eddy Cue recently inherited Apple Maps and Siri when Scott Forstall left the company. The Wall Street Journal calls Cue “Apple’s Rising Mr. Fix-It” noting that he is emerging as a very important executive in the company. Cue also recently took over iBooks and iAds and controls the App Store.

Cue is also a big part of the iPad mini. He was the one who sent an email to other Apple executives urging them to consider a smaller iPad after he used the Samsung Galaxy Tab.

The Wall Street Journal says Cue’s patient approach to his projects is under some pressure, however, largely because of music services like Spotify and Pandora. Rumors say Apple is working on an Internet radio service, but right now those streaming services are threatening Apple’s approach to music.