The iPhone and iPad App Store is down , along with iTunes and some Apple TV services as users are left unable to search for World Cup Apps, purchase movies and apps or use some of Apple’s services.

According to the Apple status page users should not see an App Store down error while looking for apps from the iPhone, iPad or computer, but the Gotta Be Mobile team and many users are not able to access iTunes services from a variety of devices across the U.S.

When trying to search for apps or load the app store users may see an error message saying, “Item Not Available: The item you’ve requested is not currently available in the U.S. store.”

Many users see the App Store Down on iPhone and iPad.

On the iPad and iPhone users may simply see a screen showing the App Store loading for a long period. In iTunes on the iPhone or iPad the error message may say “Your request produced an error. [newNullResponse]” with no further information.

Other users may see a “Cannot connect to App Store Error.” when trying to connect to an Apple App store.

According to Apple there is no problem with the App Store, iTunes, or any Apple services, but in the past we’ve seen the status page for these services update after the fact, or only include a note that some users are effected. On Twitter users complained and asked if it is down for others.

App Store down? Anyone?

For users that see one of these error messages, the best thing to do is find something else to do. Use an app on your iPhone or listen to music you already have. Apple normally responds quickly to downtime issues that prevent the company from selling you an app or entertainment. 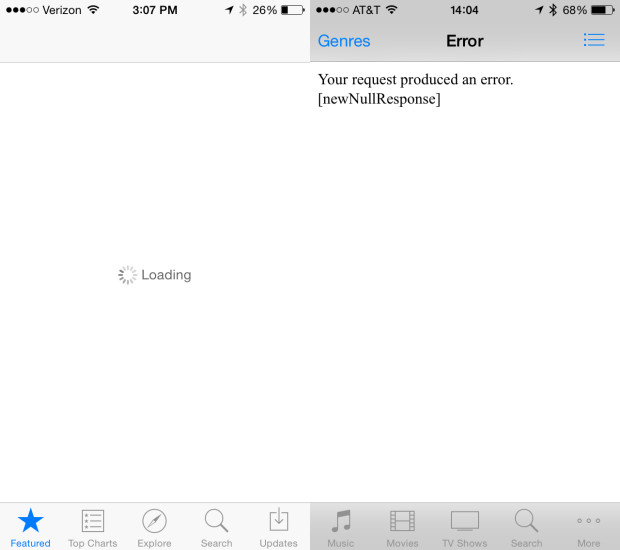 iTunes and the App Store are down for some users.

You can check the Apple Services Status page to figure out if there are any confirmed issues. There does not appear to be any downtime for iMessage or FaceTime.