iTunes Radio is an integral part of the music experience in iOS 7, offering access to Pandora like radio stations with Siri control that the competition can’t touch.

When the iOS 7 release arrives it will add an iTunes Radio tab to the Music app on the iPhone, iPad and iPod touch. iTunes Radio was rumored as iRadio, but it gets a more Apple-esque branding as iTunes Radio in the beta.

Users can download the iOS 7 beta and try iTunes radio on their own, or check out the video below to see what iTunes Radio will bring this fall.

Check out a quick tour of the iTunes Radio service and how Siri can control iTunes Radio, launching stations when you can’t tap your way to new music.

iTunes Radio competes with Pandora and Spotify Radio, but it isn’t a subscription music service like the premium version of Spotify, so don’t expect access to thousands of song and albums on demand.

In iTunes Radio for iOS 7, users can create a station based on a plethora of genres, pick a pre-loaded station from Apple or start a station from an artist or song. iTunes Radio is free to use with ads, but iTunes Match users will not see ads while using the service. iTunes match is $25 a year, cheaper than Pandora’s $36 a year Pandora One membership.

iTunes Radio works on WiFi and on cellular data, and users have the option to limit usage to WiFi if data is a big problem. 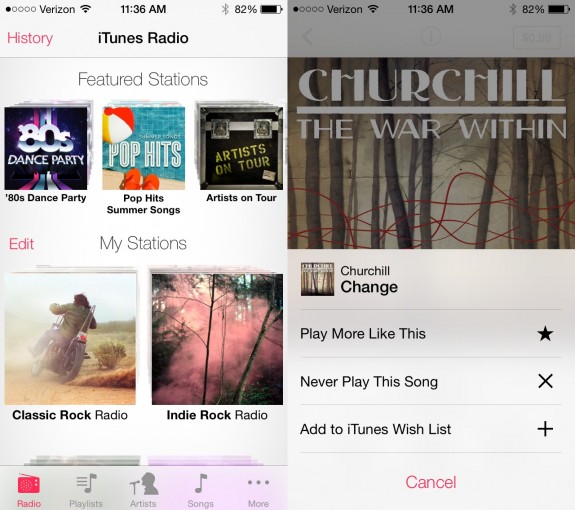 iTunes Radio is a part of iOS 7 and should arrive for all iPhone and iPad users this fall.

Siri integration is the killer feature of iTunes Radio. While driving it’s a bad idea to tap around on the iPhone to pick a new station. With Siri, users can pick a station they already created or create a new station on the fly. This is an amazing feature that Apple isn’t opening up for competitors like Pandora and Spotify.

Another nice iTunes Radio feature is that the service keeps track of all the songs it plays on a station. This makes it easy to find and buy the music you heard. While listening users can rate a song to hear more like it or to hear less like it. Users can also add a song to their wishlist to buy later and there is a button to tap for artist info and to buy the track.

iTunes Radio is still in beta, just like iOS 7, so features and capabilities can change as we move to release. iTunes Radio works on the iPhone and Apple TV now and will also work on the iPad when iOS 7 arrives. Presumably it will also appear on iTunes for Mac and PC this fall.