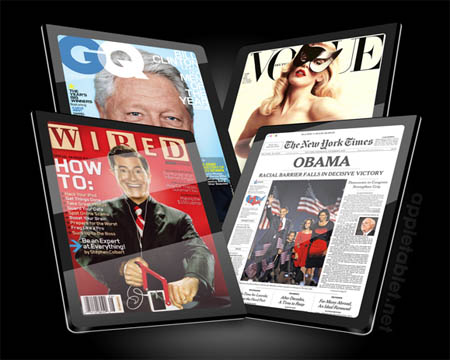 Apple and Rupert Murdoch’s News Corps will be launching a true apps subscription model with iTunes recurring billing for digital content soon, that may pave the way for periodicals, magazines, and newspapers to be purchased at a slightly discounted rate rather than at a la carte per issue pricing. News of a subscription model broke when The Guardian reported on News Corp’s all digital upcoming publication, which will only be available on tablet:

Rupert Murdoch, head of the media giant News Corp, and Steve Jobs, the chief executive of Apple, are preparing to unveil a new digital “newspaper” called the Daily at the end of this month, according to reports in the US media.

The collaboration, which has been secretly under development in New York for several months, promises to be the world’s first “newspaper” designed exclusively for new tablet-style computers such as Apple’s iPad, with a launch planned for early next year.

Intended to combine “a tabloid sensibility with a broadsheet intelligence”, the publication represents Murdoch’s determination to push the newspaper business beyond the realm of print.

According to reports, there will be no “print edition” or “web edition”; the central innovation, developed with assistance from Apple engineers, will be to dispatch the publication automatically to an iPad or any of the growing number of similar devices.

With no printing or distribution costs, the US-focused Daily will cost 99 cents (62p) a week.

Gruber says that this is a true recurring billing method implemented via iTunes rather than a standalone newsstand or periodicals store. He reported that this will not have its own storefront or app like what Apple has done with digital books through the iBooks app and the iBookstore.

If successful with digital print content, Apple could very well turn around and use this model in its music business. So far, iTunes has only offered a la carte music purchases, and a subscription music business, along with more connectivity via the cloud through mobile broadband connections and WiFi connections on modern iPads, iPhones, and iPod Touch devices, Apple could create an enormous, potentially limitless library of music for a monthly subscription cost. This, however, is purely conjecture, but with Apple building out a massive data center in North Carolina the potential for Apple’s music business and subscription model could help users who are tempted towards Zune and Windows Phone 7 come back to the iPhone with a competitive monthly subscription fee.

It’s unclear how consumers will prefer having separate apps for periodicals rather than having an integrated app for all newspapers and magazines, like the iBooks app. With separate apps, those apps could quickly fill up a user’s screen and may make it more of a chore to manage the subscriptions if one subscribes to a lot of periodicals. Having everything periodical-related integrated into an iMagazine app may make the management job easier upon the reader, but Apple probably has to negotiate with publishers so that they can have some access to user information. Demographics information is an important part of attracting advertisers for newspapers and magazines, and with individual apps, those publishers can probably embed a questionnaire to get the information they may want to obtain directly from the end-user without having to go through Apple; this way, Apple can steer clear of any potential privacy issues.

Most recently, without subscription fees having been available for the iPad, publishers had created their own coalition to try to bring digital content to Android in an effort to leverage their negotiation stakes with Apple.