Not entirely sure why I bothered to read further on Warner’s post on the iTwinge, a supposed keyboard attachment for the iPhone. I don’t like thumb boards, and it’s not what I’d call eye-catching. But I clicked through to the product site anyway and dug up some stuff that I find highly dubious. 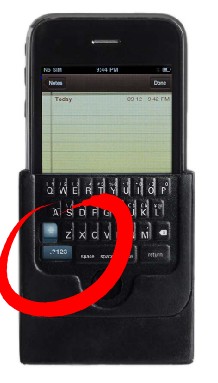 First, before anyone pulls the trigger on this item, you need to know it’s not a keyboard as we typically think of them, but a skin that fits over the iPhone’s keyboard and passes on the thumb taps to the on-screen board. Granted, this should work and would provide a tactile feel, but it’s essentially just an overlay. The shot of the “device” showing the iPhone mode-switching keyboard keys was my first red flag on this.

Intrigued by that, I went on to read the FAQ where it states directly that the iTwinge is a “skin,” i.e., an overlay, not what most of us envision when we think keyboard attachment.

Reading further, they claim the iTwinge requires no software, which I’m sure is true, but that can only be true if there’s no real hardware. All computer hardware requires some form of software to operate, and the iPhone certainly wouldn’t have drivers for a third-party keyboard pre-installed.

So no big deal, right? If it passes the key presses through, then it works as a keyboard. True, but if that’s how it works, then several other things in their FAQ are very dodgy. It mentions women with long fingernails making use of the iTwinge, which implies pressing keys with fingernails will work, but that doesn’t work on the iPhone screen. It claims “Twinge TechnologyÃ¢â€žÂ¢ is ultra low power & uses the phones power,” but I suspect it is more accurate to say “no power” and that it uses the iPhone’s power in the sense that it’s actually using the phone’s onscreen keyboard. Most telling, their answer to “Why did you place the iTwingeÃ¢â€žÂ¢ over the on screen keyboard?” doesn’t even mention that their keyboard wouldn’t work if they placed it anywhere else.

As a former copywriter, I must commend these guys for their finely crafted FAQ. Instead of directly making false claims, they drive the reader to make inferences, and omit instead of dispute. Can’t say there’s one directly false claim in it, but I don’t think there are many straight answers either. Take it as you will.