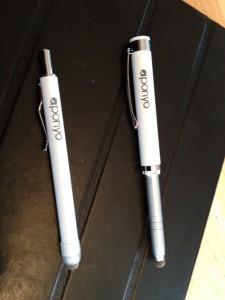 The search for the perfect stylus to use with an iPad is a never ending one. I’ve tried many and quite a few work well and get the job done. But I’ve added a new one to the mix (actually two new ones) and they come from a company called Aponyo.

Regardless of looks, the Aponyo styli I’ve tried (both the Flip and the Click) lay down Digital Ink better than my past favorites. Things just feel smoother and I feel like I have more control. (Remember, I’m mostly using these for taking notes and not artwork.)

What I hope pans out as I continue to use the Aponyo Click is that this tip holds up under continuous usage. I’ve discovered that most of the tips on the styli I’ve been using eventually suffer some wear and tear and control disappears when that occurs. The rubber-like tips seem to lose their shape, and tips like the Pogo-Sketch tend to just flatten out with time.

The Click is my favorite of the two implements I’ve ordered. Basically the “click” in the name comes from the capability to click the stylus and have the tip retract like any number of pens. I’m actually thinking this will help preserve the tip longer given that the other tips tend to pick up lint and schmutz from my pocket or gadget bags. The Flip has both a capacitive tip and a regular pen if you want to “flip” it around. I did not order or try out the Aponyo Mini. 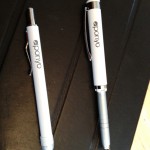 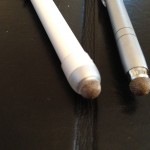 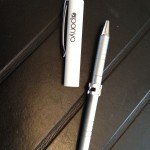 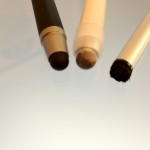