If you’ve wondered how the iWatch and Apple Maps could connect to help you get around, a new iWatch concept offers a glimpse at how the most important information from the iPhone could end up on your wrist.

The iWatch is an Apple watch that is rumored as in testing and in the works at Apple with one source claiming Apple has over 100 people working on a smartwatch. The rumored iWatch would connect to the iPhone to allow access to important information like notifications, control of music and access to maps.

Tim Cook stated that he finds wearables “incredibly interesting during an interview earlier this week, calling them a “profound” opportunity. While Cook did not mention the iWatch or go into details, one of the reasons we think he is so interested in this is because of opportunities to bring information to your wrist when you need it. That’s what this iWatch and Apple Maps concept does.

A new iWatch concept from Martin Hajek takes his classic looking iWatch concept a step further showing off how Apple Maps and an Apple smartwatch could connect.

In the iWatch and Apple Maps concept we get a look at how Apple Maps and the iPhone could connect to an Apple watch. While walking around it doesn’t always make sense to hold the iPhone out where someone could grab it and with full hands it can be tough to juggle an iPhone for walking directions. With an iWatch, the directions and an arrow showing the way to go could appear on the watch face.

In this concept we see a small area to tap, presumably for a list of directions, and a compass that would orient the iWatch with the direction a user is facing. 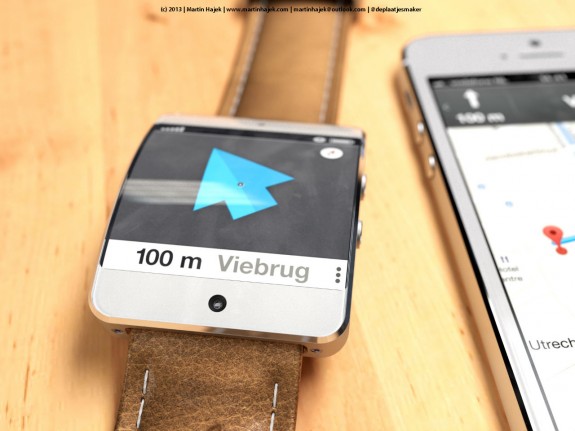 iWatch concept shows how Apple Maps could look on an iWatch.

This is just one way the rumored iWatch could connect to the iPhone to deliver important information. Other possible iWatch features would include access to notifications, possibly with a smaller version of the Notification Center and a PassBook like feature that shows a boarding pass or a Starbucks card. While testing an early smartwatch, the ability to receive alerts for calls and texts as well as pay for a drink at Starbucks were impressive.

While there are expectations for an iWatch release later this year, an Apple analyst with a good track record predicts a later arrival. KGI Securities analyst Ming-Chi Kuo claims the iWatch won’t make it to markets until late 2014, which is also when we expect to see the iPhone 6.