This isn’t the first iWatch concept we’ve seen, but it is one of a few that we could see in an Apple Store or on the wrists of watch lovers and tech fans.

MacUser magazine partnered with Martin Hajek to design an iWatch that borrows from rumors, Apple patents and classic watch design.

The result is the iWatch concept below, complete with a modified version of iOS, Bluetooth connectivity and gesture controls. 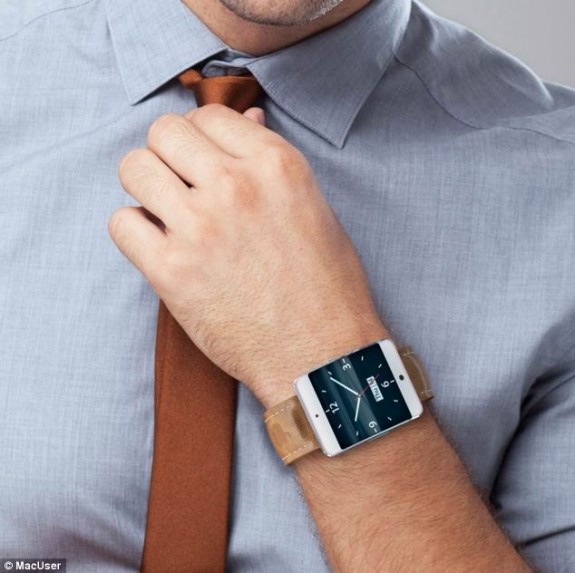 How an iWatch might look on your wrist, with a classic leather strap.

MacUser explains the design of this iWatch concept to The Daily Mail, saying, “We came to the conclusion that Apple’s most likely play would be to keep its watch as conventional as possible, with the feel of something classic rather than excitably innovative,” according to

Rather than use the iWatch slap bracelet concept like we’ve seen before, MacUser opted for a more traditional leather strap. If Apple were to use such a design we could see a thriving market for third-party iWatch wrist traps, similar to the craze that popped up after people decided to use the iPod Nano as a watch. 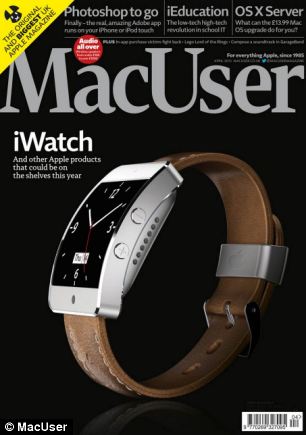 The front of this iWatch concept offers a curved glass design that almost looks like someone heated up an iPhone 5 and bent it partway around a hand. The back of the iWatch concept is not curved, but juts out. Presumably this is to provide space for the components and battery.

The iWatch design uses style similar to the iPhone 5, with a beveled edge, which allows it to look like a piece of jewelry or high fashion as well as a high-tech device. A mass-market iWatch would need to look better than some of the bulky smart watches already on the market.

When it comes to keeping the iWatch powered and using the iWatch, the team believes Apple could use motion to light up the display based on the act of lifting the hand and turning it to the face. In addition to gestures, the iWatch concept would respond to Siri Voice control and offer touch a touch screen experience. The modified version of iOS would show Tweets, weather and downloaded apps. In one concept image we see a notification for Tweetbot suggesting Notification center integration could be a key feature. 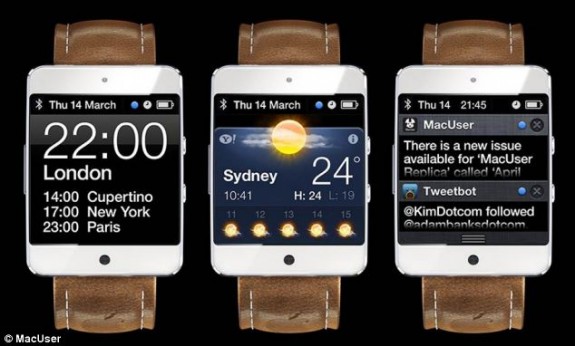 An example of how iOS might work on an iWatch concept with Notification Center support.

This iWatch concept relies on the iPhone’s data connection and does not feature a webcam.

Rumors point to a team of 100 Apple employees working on an iWatch. If Apple is investigating an iWatch for release in 2013, these eight people likely know what it looks like, at least in an early prototype form, even if Tim Cook won’t talk about it.

One report claims Apple is preparing for an iWatch release date in 2013, and that it could be more profitable than an Apple HDTV set.