During the Apple keynote announcing the changes to the iWork suite of applications, it was mentioned that those apps would be free for “new purchasers of Mac and iOS devices.” What was unclear at the time, and clear now, was whether or not any user of Mavericks would be able to download the newest version of iWork for free. The answer, unfortunately, is no. If a user has purchased an iWork app through the Mac App Store in the past, then the upgrade to the newest version will be free.

UPDATE: A loophole as been discovered that let’s older Macs get the new iWork suite for free. Follow this how-to guide to learn more. 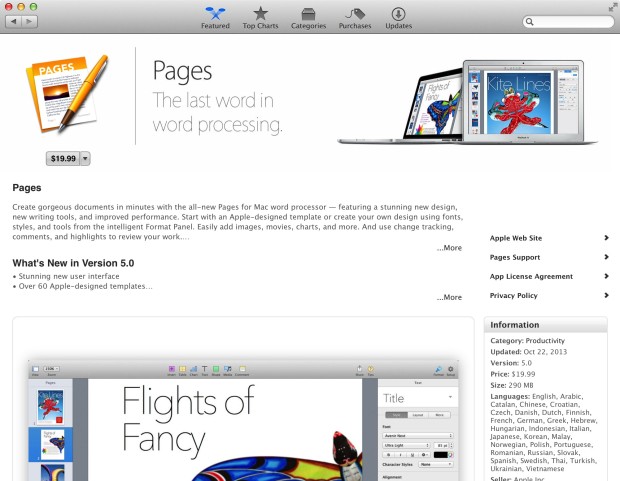 The Pages page on the Mac App Store showing the new version at $19.99

For people purchasing a brand new Mac or iOS device, the apps should show in the App Store under purchases. Specifically on the Mac App Store, there will be a section at the top of the Purchases screen allowing the user to claim the apps for their account (most likely similar to how iLife apps do it now). 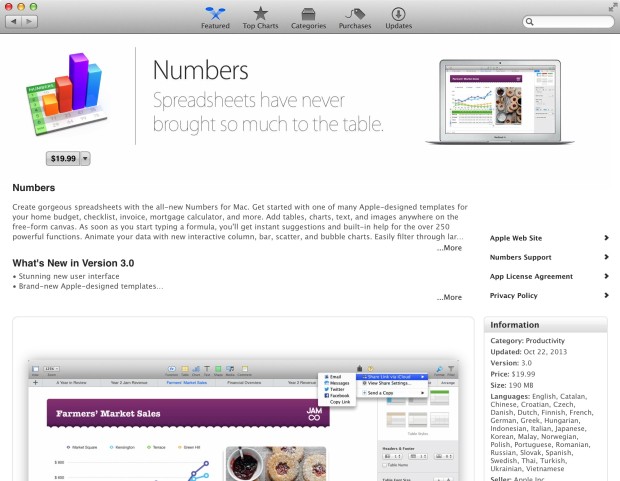 The Numbers page on the Mac App Store, again showing the $19.99 price.

For those on pre-existing Macs, when they attempt to download the newest iWork software, they will be presented with a $19.99 price to purchase and download the software. While seemingly disingenuous on the face of it, before the age of digital downloads if Apple wanted to include free software with a new computer, they would drop the CD or DVD in the box. If this were an Apple announcement of old, Apple would have said “all new Macs come with the newest iWork for free.” Perhaps that is how it should’ve been worded during this announcement, lessening the confusion? 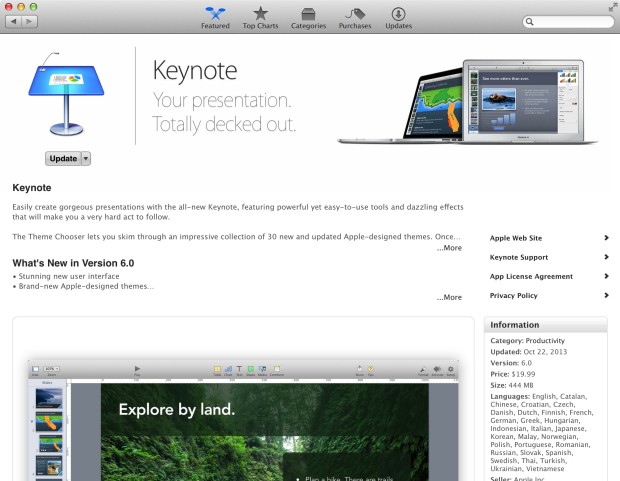 If a current user has purchased an iWork app from the Mac App Store in the past, it will show up as being available to update when visiting the associated page. However, we have heard from some people on older versions of Keynote that they cannot update to the newest version for free. Presumably, those are disc-based installs and not purchases from the Mac App Store.

Note from the iLife / iWork page on Apple.com

Apple did not mislead with today’s announcement, but in the giddiness of all of the changes coming to iWork, the message may have been overlooked. For those purchasing new Macs today, iWork will be free. For those who purchased iWork apps in the past from the Mac App Store (or through the built-to-order program), they should be eligible for the free update. For those who have current Macs, but did not purchase iWork before (from the Mac App Store), they will have to pay for the updates.