Apple greeted users of iWork for iCloud who logged into the service this morning with a notice saying, “We’re updating Pages for iCloud!” Opening Numbers or Keynote showed the same error. The service lets users see the thumbnails of their documents, but when opening a document, the image below gets displayed.

Could this notice mean some new updates coming at today’s Apple announcement of the new iPad mini 2 and iPad 5, MacBooks and Mac Pro too? We’ll find out soon when Apple presenters take the stage.

Earlier this year Apple added a cloud version of the iWork suite and only let developers use the service at first. Then they opened it up to others, making it available on Windows, Linux and Chrome OS. It runs quite well in Safari, but other browsers can use it with some reduced functionality. 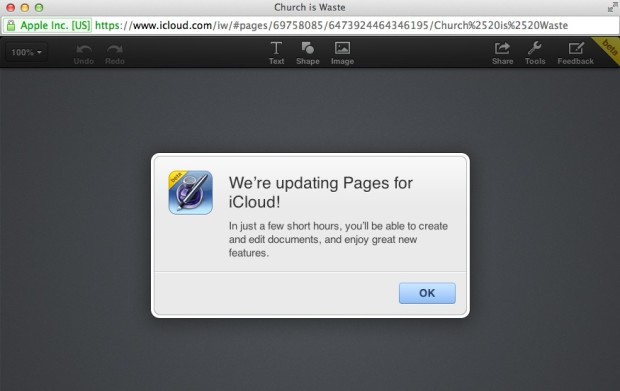 The notice on the site also reads:

In just a few short hours, you’ll be able to create and edit documents, and enjoy great new features.”

What could the new features include? At the very least, we hope to see a much improved iCloud. The service often fails for users with sync that’s unreliable. We struggled to open documents created on the Mac on the iPad many times during this beta period. We also saw iCloud gobble up settings, appointments and contact information. Image syncing between an iOS device an iPhoto takes so long we quit relying on it in favor of DropBox image uploading instead.

We’d also like to see the desktop versions of the iWork apps updated. Apple’s only offered minor fixes over the past few years.

Buyers of an iPhone 5s and iPhone 5c enjoyed free versions of the three iWork apps. We expect Apple to offer the same deal to iPad buyers. Maybe they’ll offer the apps to Mac buyers too.

iWork for iCloud gives users a basic office suite environment in the cloud. However, it doesn’t compare to iWork apps on iOS or OSX. We’d like to see better Apple add more of the app features to the iCloud experience.