At the Apple Keynote this week, the team unveiled new hardware like the iPad Air, an iPad mini with a retina display, new MacBook Pros and a Mac Pro. Couched between all of those expensive devices, the company also finally updated the Mac iWork suite of office productivity apps, namely Pages, Numbers and Keynote. We downloaded the new apps and want to show them off to readers.

First, understand that Apple took a drastic step making these apps free to those who purchase a new Mac or people who already bought them. Others must pay $20 each. They’re subsidizing their software and services with the costly machines.

Not all users will get the suite of apps for free. People who never bought them can buy them for $19.99 each in the Mac App Store. 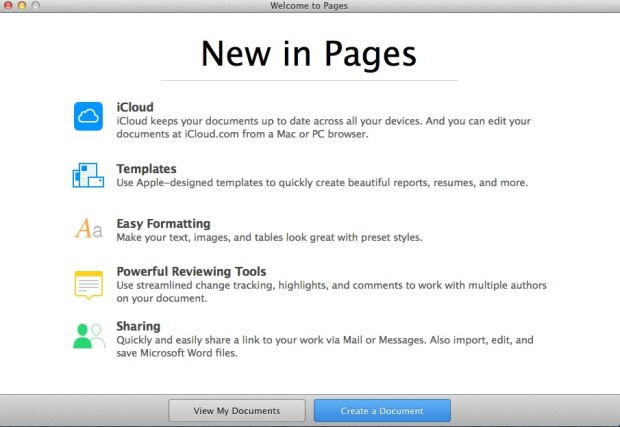 Each app opens in a “New in Pages” (or Numbers or Keynote) splash screen, which explains the new features and then shows two buttons. One button lets users view documents already available while the other creates a new document, spreadsheet or presentation.

The iWork apps come with a new user-interface. It looks flatter and more iOS 7-like. The basic framework remains the same with a sidebar on the left that shows thumbnails of pages, sheets or slides.

The apps also offer something called Tips, which put yellow call-out bubbles on the key features to help new users learn the user-interface. See them in the image below.

In Pages, a toolbar offers buttons for important often used functions. The right hand sidebar, called the Inspector in the iWork apps, opens in text formatting mode, but can also show document setup mode. This mode helps with choosing a printer, paper sizes, orientation, margins and more. The document setup mode shows two tabs. One sets the document up and the other shows section setup. 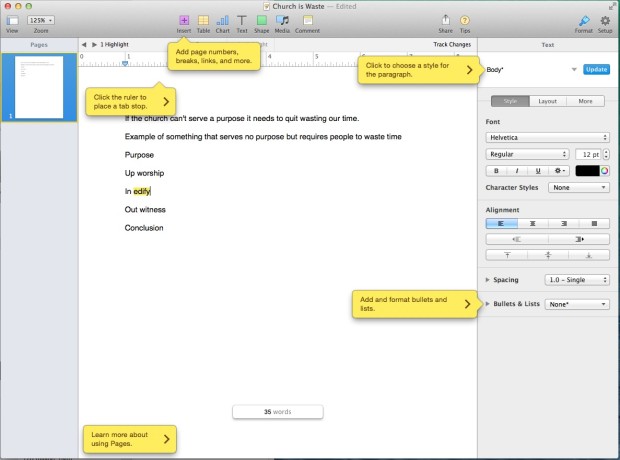 Above the ruler bar, which users must turn on after opening a document, there’s a group of buttons for navigating document markup for editing. We get highlighting, a back/forward button to jump between highlights and the ability to add comments and view editing.

As a user of Pages, this new version will take some getting used to, but the modern user-interface and the new templates look great.

The old version offered a style drawer that popped out from the side of the Pages window, and in full screen mode disappeared off the side of the screen. It works better in the right-hand Inspector that has replaced it.

Styles let users apply a set of formatting options in a single click or keyboard shortcut, at least in the former version. User assigned shortcuts let me hit a key combination to apply a bunch of formatting quickly. That’s gone now, as Apple did dumb down the OSX versions of iWork to make the apps work better with the iCloud versions. Productivity for people who prefer to use these keyboard shortcuts will hurt productivity.

With this update, Apple refreshed the templates available, adding some attractive new options. The old favorites show up in the list along with the new ones. This alone makes the trouble of downloading the free update worth it. 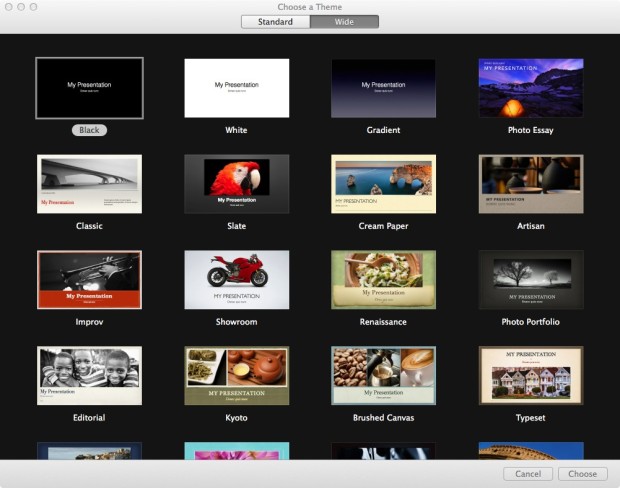 The Keynote user interface looks like the earlier version with a cleaner, flatter look, just like Pages. The inspector got an overhaul making it simpler but more useful, like Pages. 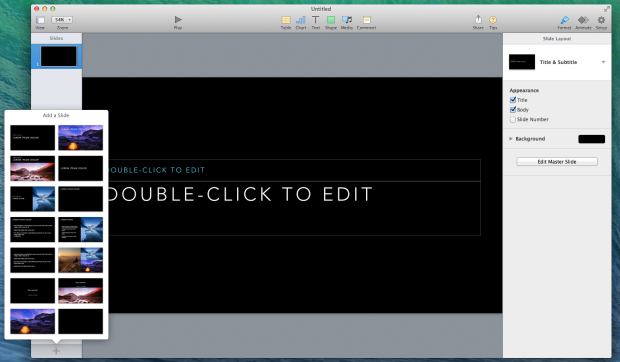 We really like the new Inspector in all the iWork apps, but in Keynote especially. The ability to build slides, add transitions and change the slide’s format got so much easier with this release.

The new Numbers shares the design of the other iWork apps. It also offers new templates and a cleaner interface. 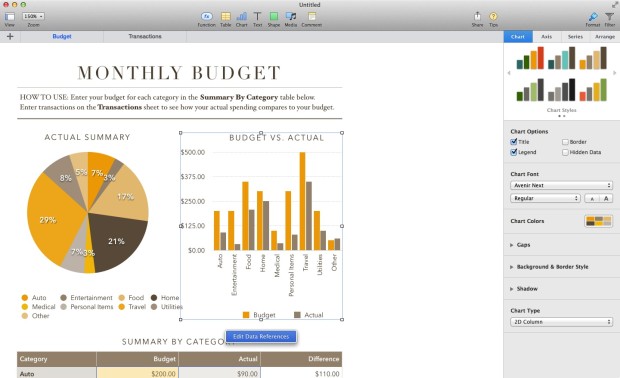 We like the new look and feel of these apps, but Numbers simplicity makes Spreadsheets more accessible to those of us who don’t spend all day in Excel playing with Pivot Tables for fun. The templates alone make doing powerful tasks simply.

The Inspector makes changing the look of a presentation easy. One click alters colors, fonts and more.

The key element in this update brings sharing between the Mac and iOS. The link between the two comes in the form of iWork’s online interface via iCloud.com. 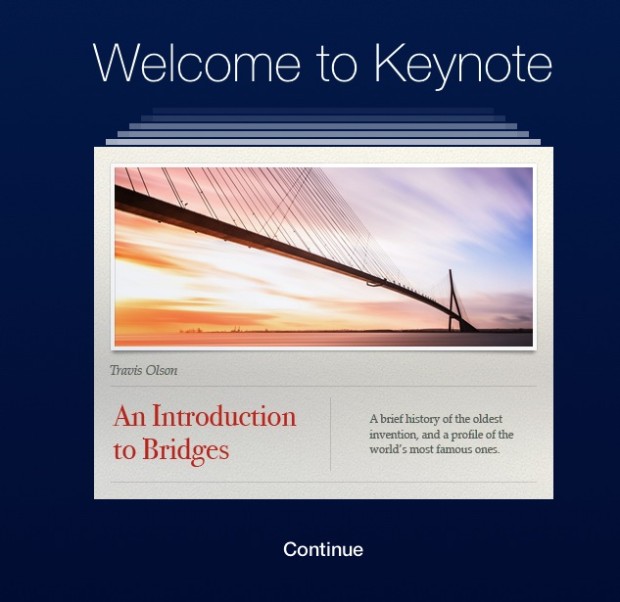 The first time a user opens one of the iCloud-based iWork apps, they’ll see the same welcome screen they get in the desktop app. Opening the apps reveals an interface that’s simple, but almost identical to the computer app user-interface. However, instead of bringing the online app to the same level of usefulness of the OSX version, they went the other way. The OSX versions reduced functionality to match the iCloud versions.

We love the sharing features. Send a link to a friend or coworker and they can open the document, spreadsheet or presentation. 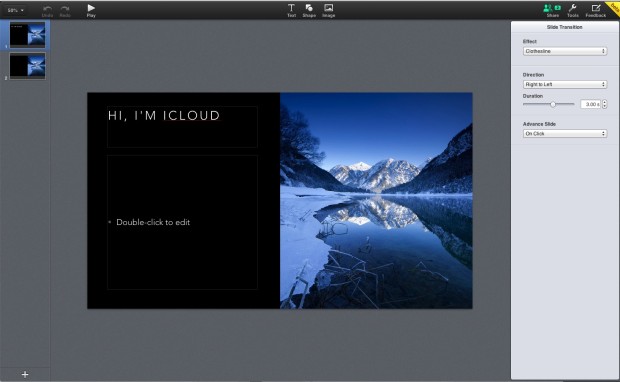 Finally, we love that the iWork apps in iCloud online work on Windows, Linux and Chromebook. A person who works in a Mac shop can go home and use their home Windows PC to edit their docs. They can take a $250 Chromebook to a coffee shop and still work with most of the features in iWork in iCloud.