iWork vs Microsoft Office 2011: Which Office Suite is Best for Mac Users?

Apple Mac users can choose from a number of options for office productivity software, but for most Mac users it comes down to iWork vs Microsoft Office 2011 for Mac. We haven’t seen an Office for Mac update in a long time, but rumors say Microsoft will release one in the few months. Meanwhile, Apple just updated the iWork apps with features that take advantage of Yosemite’s iCloud Drive, as well as Continuity features that connect an iOS 8 device and a Mac.

What are the key differences, and does Microsoft Office give people enough to make it worth the extra cost over the free iWork apps that come with all new Macs? We will look at the key differences in this iWork vs Microsoft Office 2o11 comparison so that Mac productivity users can make an informed choice between the two options for office software. 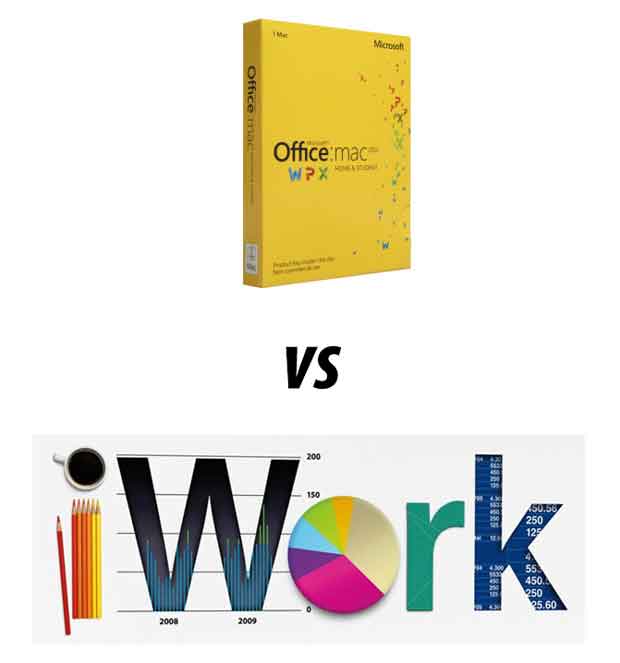 Cost of iWork vs. MS Office

Any iWork vs Microsoft Office comparison should include cost. Microsoft changed the way they sell Office recently, going to a subscription model. Buyers choose between a less expensive Office 365 Personal version at $6.99/month or $69.99/year and can install it on one Mac and one iPad. They can also pick the Office 365 Home version for $9.99/month or $99.99/year version, which affords much more flexibility. You can then install Office on up to five Macs or PCs and install the office suite on up to 5 tablets, including iPad or Android.

People who don’t want to rent software can still grab Office for Mac Home & Student for $139.99 or $219.99 for the Home & Business version and there is no monthly subscription. Head over to the Office for Mac comparison chart to decide which option is best. The subscription model means buyers get major updates for free, like a rumored update to the Mac version this year, or early next year. Pay for the full version without the subscription and you don’t get the update for free.

iWork comes free on every Mac Apple sells. People who own an old Mac can buy the three iWork apps for $20 each from the Mac App Store.

As we look at iWork vs Microsoft Office, the user interface will cause a divide between power users and those who prefer simplicity.

When the user opens Microsoft Office apps, they will notice a complex user interface that includes the Ribbon; a large toolbar that brings a tabbed interface to the program. Each tab centers around features grouped by usage. For example, in Word the Layout tab includes tools that let the user change margins, page orientation, columns and page backgrounds. The other tabs show different buttons and tools.

iWork apps like Pages use only one toolbar with a handful of most used features. It’s simpler but less powerful.

In the iWork apps the user only sees one toolbar along with a sidebar. The sidebar changes based on what the user does in the document, spreadsheet or presentation.

The user interface highlights the key difference between the two programs. Office for Mac does almost anything a word processor can do. Microsoft’s list of features dwarfs that of iWork. Alternatively, iWork is a simple set of programs that do the basics.

The complex collection of features in Microsoft Office results in a steep learning curve. Users can open it and start typing in Word, but to do more advanced functions the user will need to spend time learning the applications. Using advanced functions in iWork also requires some training, but not as much.

Let’s look at the main programs included as we make this iWork vs Microsoft Office 2011 for Mac comparison. iWork includes three programs: 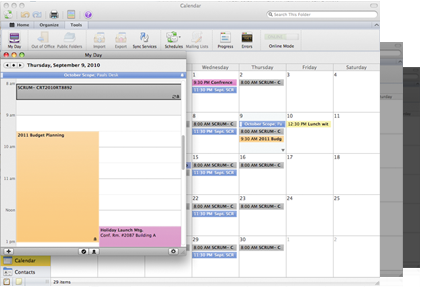 Outlook 2011 for Mac integrates email, calendar and tasks into one powerful but complex tool.

If Outlook matters, then buyers will need to get the Home & Business version of Office, or the full version of Office 365 subscription. iWork users need to use the free Yosemite apps like Mail, Reminders, Contacts and Calendar. Outlook puts it all in one powerful, but complicated tool. Apple apps offer simpler, but less potent, apps separated into multiple apps.

Office users get more features, like the way Word shows formatting before it’s even added. Word will show users what their text will look like with a new style applied just by highlighting the text and then hovering over the style name on the Home ribbon. To see what the style looks like in Pages, the user must apply it first. That’s only one of hundreds of features Office includes that don’t come in iWork.

When it comes to Numbers, it doesn’t compare favorably to Excel for advanced features. Apple even acknowledges this with a helpful list of features either not supported at all, or only partly supported, in Numbers. There’s one for Pages and Word, as well as Keynote and PowerPoint.

When it comes to PowerPoint versus Keynote, Apple shines. Again, PowerPoint does more, but Keynote looks better. Keynote templates look better because their layout looks cleaner and elegant with better design.

Here’s one area where Apple wins in our iWork vs Microsoft Office 2011 head-to-head. It’s far easier to write in an iWork app and then open it on an iPad or iPhone and use the mobile versions to view or edit iWork files. Also the online versions of Pages, Numbers and Keynote work almost as well as the Mac and iOS versions. Now, thanks to the new Continuity features in Yosemite, this interoperability only gets better.

iWork’s Keynote does a better job of syncing between Mac and iOS than Office.

Microsoft improved interoperability with Office 365. Users can sync their files from their Mac to OneDrive and then access them on an iPad, iPhone or online through the cloud-based editors. However, it’s not as simple to do as it is with Apple’s system. Also, OneDrive isn’t fully integrated into Office 2011 for Mac. We’re waiting on a much-needed update that should address this, but it probably won’t come until 2015 according to recent rumors.

iCloud syncs with Mac and iOS versions of iWork better than OneDrive with Office.

iWork’s mobile and online versions work so much like the Mac versions because Apple doesn’t pack as many complex features into their programs. In fact, the most recent major revision last year dumbed down iWork when compared to the ’09 version to bring us better interoperability. Instead of making the iOS and online versions more powerful, they made the Mac version less powerful. Apple added back some features, but iWork ’09 had features that still don’t show up in the latest releases.

iCloud Drive in Yosemite and iOS 8 does a better job of syncing files between Mac, iPad, iPhone and the online version. Users used to only access their files inside the iWork apps. It worked really well, but also required a hack to see the files in Finder on a Mac outside of Pages, Numbers or Keynote. Now users can open Finder and see iWork files directly from the iCloud Drive folder. Let’s hope Microsoft takes advantage of iCloud Drive in an upcoming release of Office for Mac and iPad/iPhone. Better still, give us complete integration of OneDrive like we get in Windows 8.1 and Office 2013 for Windows.

We know that many Mac users also use Windows. Maybe they use a Mac at home but the office requires them to use Windows. If that’s the case, and the person does a lot of work from home, get Microsoft Office 2011 for Mac. Ask the IT people at work if it’s possible to install the program on a Mac for free as part of the license. If not, they might get a discount for you.

Let’s answer our first question about which office suite Mac users should use? That depends on what’s most important to the end user?