After several months this is the fourth Black Ops 3 Double XP weekend since the release and it is the first opportunity for gamers who received Call of Duty: Black Ops 3 for Christmas to use this chance to level up faster.

The timing lines up so that this ends one day before the Awakening Black Ops 3 DLC release date on PS4, and about a month before the Xbox One and PC release. 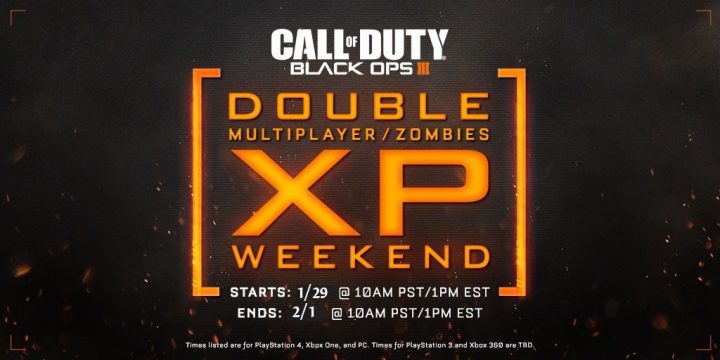 After experimenting with 2X Cryptokeys and Double Weapons XP, Treyarch takes it back home to 2X Multiplayer XP and 2X Zombies XP for the last weekend in January.

Get your Replacer lined up…you're going to need it.
Tomorrow at 10am/PST we'll activate 2XP for MP/Z (runs through Monday 10am/PST).

To maximize the time during the January Black Ops 3 Double XP weekend and to level up faster you should play on focused modes that deliver a lot of XP per game.

[contextly_sidebar id=”KwSXoXdAiNJeY3cn9gbwmF2d71QAuX2d”]We recommend playing Kill Confirmed to get the most XP per match, even if you aren’t the greatest player. You earn 50 XP per kill and 100 XP per dogtag you pick up, with a 25 XP bonus for picking up your own team’s dog tags.

Without Double XP we played Kill Confirmed last night and went from Level 1 to Level 6 on PS4 in a very short time. During the January Black Ops 3 Double XP weekend playing Kill Confirmed can easily allow you to level up 1.5 to 2 levels in a good game.

You can play in Hardcore or in Core playlists, but if you are able to play Hardcore Kill Confirmed you will likely get more headshots which can help you level up weapons faster and earn more XP for those unlocks.

If you prefer to play objective modes, that is still a great option, since you will rank up faster in Black OPs 3 the better you play.

This includes four new maps and a new zombies experience. The latest ad features The Replacer, who will take your place while you play more Call of Duty.

If you are considering buying the Awakening Black Ops 3 DLC, this is what you need to know about the decision.