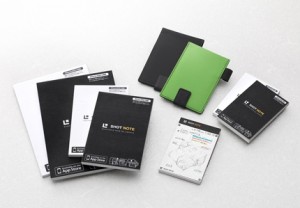 A smarter way to marry paper notes and the digital world was introduced in Japan. A stationery company called King Jim is producing pads of paper designed to be photographed by iPhones with a system to crop and order the images as notes.

The notepads, which are available in four sizes, have square codes in each corner that are recognized by the Shot Note app (Japan only) in order to crop the image to the right size. The page header has a grid where date and number can be entered in a way that the app can recognize for sorting. Thus, the sizing and sorting problems associated with digitizing paper notes are automatically addressed.

No word on when or if this system will be ported to the States, but if anyone should get involved in making that happen, it’s Evernote. Perhaps they could license the Shot Note system and incorporate it into their mobile app and sell the notepads through the gear section of The Trunk. Let’s see that happen, people.