HARMAN is releasing a new set of AirPlay enabled speakers under the JBL name which allow users to stream audio wirelessly using Apple AirPlay technology. The JBL On Air Wireless AirPlay speaker dock supports wireless streaming and has a dock for charging and playing audio. 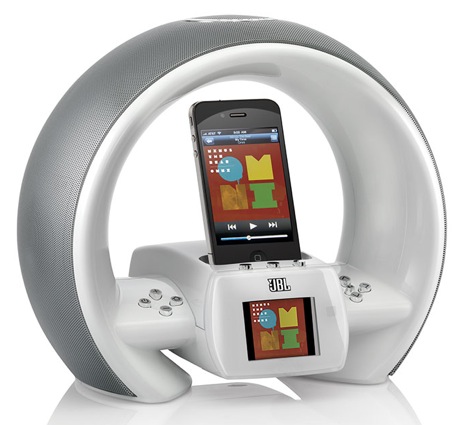 The JBL On Air Wireless AirPlay speaker dock will give wireless AirPlay audio to users anywhere in their home or office. Users can play any music or audio in their iTunes library from either a Mac or a PC. Since it also has an iOS dock it will also play audio from an iPhone or iPod. And using the built-in Wi-Fi of both the On Air Wireless AirPlay speaker dock and the iPhone, iPad or iPod Touch, a user can play music or audio from one of those iOS devices to the speakers without even plugging it in.

The cost of the system is $349.99 from either Best Buy or Apple’s online store. That may sound like a lot, but we’ve seen AirPlay speakers priced higher, like the Philips SoundSphere’s which run $1,100 and a Bowers & Wilkins Zeppelin Air docking system that is running $600 on Amazon. There are cheaper options available, but JBL is a good name in audio and cheaper doesn’t always mean better.

Another AirPlay option is to set up a set of your own speakers and using an Apple AirPort Express as explained at AirPlay Speakers. You will need a Mac and it has limits, but a benefit is you get wireless streaming and networking of a printer. 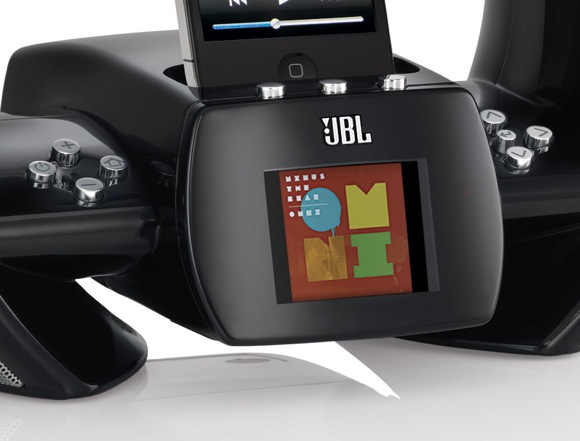 The JBL On Air Wireless speaker dock has a display on the front that will show the album art work of the songs being played. 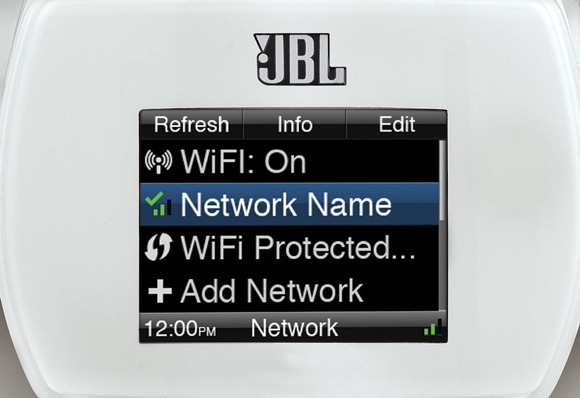 The included remote will pause the music, skip to the next track or back to the previous track and again play the song. 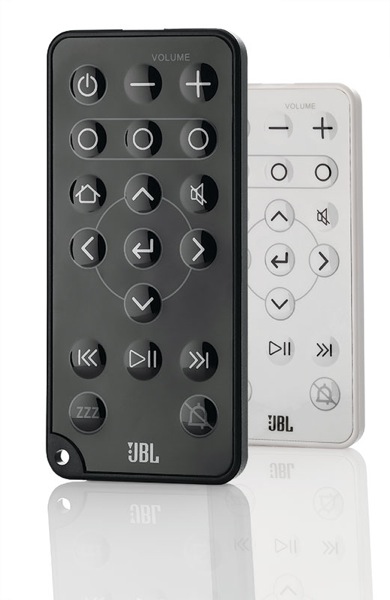 For audiophiles who understand the geekier side of speaker technology, the speakers include a “unique HALO (horizontal acoustic level optimization) design.” For us audio lay people, that means the unit should sound pretty good at all the angles around it in a 360 degree radius.

The speaker dock also includes a digital FM radio with 10 presets for your favorite stations. There is also a built-in alarm clock. They come in two colors – black and white. For more details, here is the press release:

NORTHRIDGE, Calif. – HARMAN International Industries, Incorporated (NYSE: HAR), today announced the new JBL On Air™ Wireless AirPlay® speaker dock, the newest in the JBL® lineup to provide music lovers an even more seamless music experience within the home. With AirPlay technology built-in, the JBL On Air Wireless lets you play music from your iTunes® library on a Mac or a PC, and from an iPhone®, iPad® or iPod touch® device over your existing Wi-Fi® network. Users will enjoy album artwork and song information on the bright color display, and can use the included remote control to play and pause music, as well as navigate to next and previous tracks. AirPlay requires iTunes 10.1 or later and iPhone, iPad or iPod touch with iOS 4.2 or later.

“Since the unveiling of our very first iPod dock, HARMAN has always been at the forefront of creating the most cutting-edge products for consumers,” said David Slump, president, HARMAN Consumer Division. “With the new JBL On Air Wireless speaker dock, JBL will set the standard again by introducing a solution for music lovers to store, access and listen to their music content for an even greater seamless music experience within the home.”

The JBL On Air Wireless speaker dock will be available in April 2011 for $349 MSRP at Best Buy and Apple online and retail store locations throughout the U.S. To learn more, visit https://www.onair.jbl.com.

JBL On Air Wireless AirPlay Speaker Dock at a Glance: