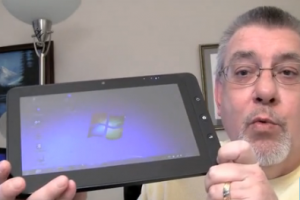 Our good friend James Kendrick has a run down of two touch interface overlays for Windows 7 tablets, Thinix Touch and Mirabyte FrontFace, both shown off on his TEGA v2. Slick looking interface environments. Very informative video from James. But ultimately, overlays like these only cover up the problems beneath.

In contrast to what I’ve done with Firefox on my small touchscreen tablet, which is a tailoring of a specific application interface, this type of software is an overlay that lies on top of the standard Windows interface as a separate application launcher and environment. Makes it easier to get to applications, but the applications themselves still aren’t touch-optimized. I certainly agree with James that they do make for a more touch-accessible experience on Windows, but they show a distinctly “Big Button” approach. Good enough as a patch for now but not in the long run.